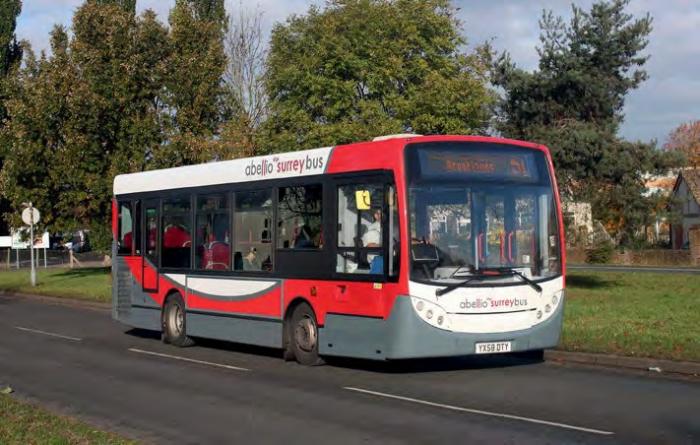 In what it describes as a ‘hammer blow’ to its business, Abellio has lost all of the contracted work it retained with Surrey County Council and is reviewing whether to continue operating commercially in the county.

Subject to ratification at a council cabinet meeting on 27 June, Surrey has advised Abellio — owned by the Dutch state railway — that the new contracts for 17 routes and the supported element of an 18th have gone to other operators. Stagecoach South, Rotalaowned Hallmark Connection, RATP-owned London United, Telling family-owned Falcon Coaches and the old established White Bus Services are the main winners.

This development follows Abellio’s decision last year to seek early termination of its contracts with Surrey and the council’s award of short-term contracts to replace some of them.

‘In a statement to staff, Abellio London & Surrey managing director Tony Wilson says: ‘This is clearly a hammer blow to the business and, as you can imagine, there’s a great deal of consideration required before we can definitively tell staff at Byfleet or our customers what happens next.

‘However, I can assure you that, irrespective of whether we continue to operate commercial services from the depot, all drivers and engineers will be offered alternative roles at a London depot of their choosing. Although the news is not what we would have hoped, they do not need to worry about having a job.’

He says the timescale is extremely short for deciding what, if any, bus service structure it continues in Surrey, but anticipates making a further announcement during June.

The new contracts see Stagecoach retain route 715 (Guildford-Kingston), which it took up from 31 December on a short-term basis — taking its deregulated business into Greater London for the first time — and also replace Abellio on Woking shoppers’ services, routes 81 (Woking-Barnsbury), 446 and 456 (Woking-Staines) and 690 (Woking College- Worplesdon), and Dickson Travel on route 48 (Woking-Frimley Park Hospital).

Besides Abellio and First, Cardinal is the main loser in this tendering round, also losing route 513 (Kingston-Downside) to Reptons of Bookham as well as those awarded to Hallmark and London United.