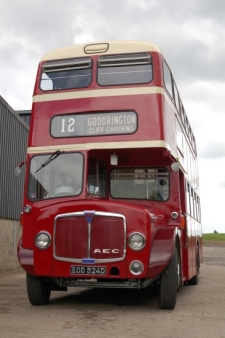 The Devon General Omnibus and Touring Company purchased its first fleet of AEC Regents in 1934. The company reverted to the regent from 1962 after putting 56 Atlanteans in service in 1959-61. In 1966, five 27ft long by 8ft wide Regent Vs entered service - this batch being very near the end of production of the AV590 engine. More Atlanteans were supplied in the same 1966 order.

524 was built with the one of the lasts set of body frames supplied by Weymann’s of Addlestone in Surrey and the bus was constructed at the Metro-Cammell plant at Washwood Heath in Birmingham. In order to perform adequately on the hilly Inner Circle routes around Torquay for which this batch was purchased, the AEV 590 engine was specified (the Routemaster power unit), developing around 150 brake horse power from its 9.6 litre capacity. In line with their expected 12 year life, 524 was withdrawn in 1978 having been transitioned in poppy red NBC colours for its last years in service. It was old to a language school in Torquay for student travel and subsequently passed to Ironside Travel in Kent where it acted as a workers bus on the Dungeness nuclear power station construction project.

In 1985, 524 was bought by a group of Midlands Devon general enthusiasts and restored to its 1966 condition and livery. A large amount of repanelling work was done but the bus was blessed with an interior that had not been tampered with including retaining its original colours and seat trim. It was painted by a retired Birmingham City Transport painter by hand with a final coat of varnish. This paint finish is still there today having worn exceptionally well

524 made its first rally appearance in 1989 and has since travelled far and wide from the Peace Hall rally in Halifax to regular trips to Devon and its old stamping grounds. Here it has run on its former routes at Devon general Society running days.

The vehicle is privately owned and resides in Nottinghamshire along with its Devon General single deck sister; Marshall bodied 1964 AEC Reliance, fleet number 9.