Volvo wins its biggest order yet for the electric 7900 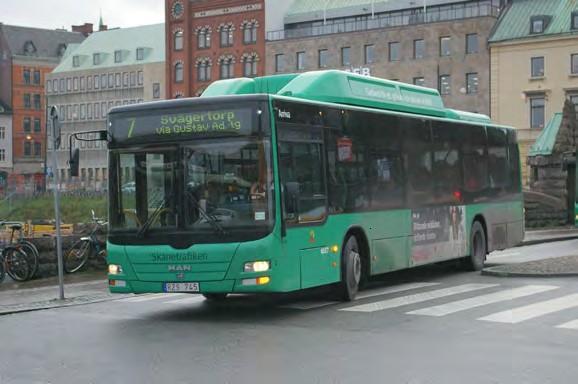 Malmö route 7 in 2008, operated by Arriva with a gas-fuelled MAN.
COLIN DOUGLAS

Leading Swedish operator Nobina has placed the largest order so far for Volvo’s 7900E opportunity charged electric single-decker to convert an entire route in the city of Malmö from gas to electric vehicles.

The 13 buses will operate 14.7km (9.1mile) city route 7, supported by Volvo’s OppCharge overhead charging gantries, which will charge the lithium-ion batteries at each terminus, taking between 3 and 6min.

News of the order came a week after Volvo announced an expansion of the ElectriCity demonstration in its home city of Gothenburg. Its trial of three pure electric and seven 7900 electric hybrids on OppChargeequipped city route 55, which began in 2015, is being extended from 2018 to end in 2020.

That trial was launched to coincide with the Volvo Ocean Race coming to Gothenburg and when the race returns next June, two 7900E bendybuses will be launched on busy route 16 between Nordstan and Frihamnen alongside existing double articulated Volvo diesels. Additional OppCharge stations will be at Eriksbergstorget and Sahlgrenska Hospital.

‘We want more people to give up their cars, cut emissions and reduce noise levels,’ says Ulrika Frick, chair of the Västra Götaland regional public transport board. ‘Electric buses help us reach these targets and our mission is to create the public transport of the future. That’s why we are now looking forward to the next big step, testing larger electric buses on more frequent routes and with more passengers.’

The first four production 7900Es entered service in June in the Luxembourg city of Differdange, where operator Sales-Lentz is using them on four routes of up to to 9.5km (5.9miles).