The newly restored 1948 battery powered model double-decker. Access is by a full depth hinged door behind the rear wheel. 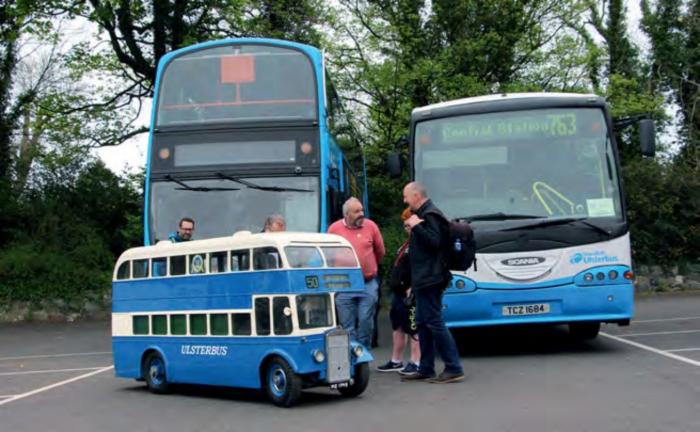 A heritage livery on a current vehicle and another on a working scale model helped Ulsterbus — the UK’s largest public sector bus company — commemorate its first half-century at the Ulster Folk& Transport Museum on 22 April.

Kept out of public view until the Irish Transport Heritage bus rally that day, a Wright Solar Rural-bodied Scania K230UB was repainted in an interpretation of the Riviera blue and trader ivory used when Ulsterbus took over the road passenger operations of the Ulster Transport Authority on 17 April 1967.

Also on display outside was the model of a Northern Ireland Leyland Titan double-decker normally on show as an indoor exhibit at the museum. Since it was built in 1948 as an apprentice project, it has been painted in the UTA’s two-tone green and cream livery, but staff at sister company Metro’s Falls Park depot in Belfast repainted it in Ulsterbus livery for the anniversary, effectively commemorating the one lowbridge double-decker that carried these colours in real life.

The battery-powered model has been overhauled, allowing it to return to working order. Entry is by a hinged door in the nearside rear and the steering column reaches the top of the half cab.

The museum also hosted a commemorative display about Ulsterbus for the anniversary and the company’s retired managers’ group held a special luncheon at the Manor House in the museum.

A significant number of current and retired staff attended the rally and Chris Conway, chief executive of parent company Translink, presented awards to the winners among around 50 Irish and British vehicles entered in this popular annual event.