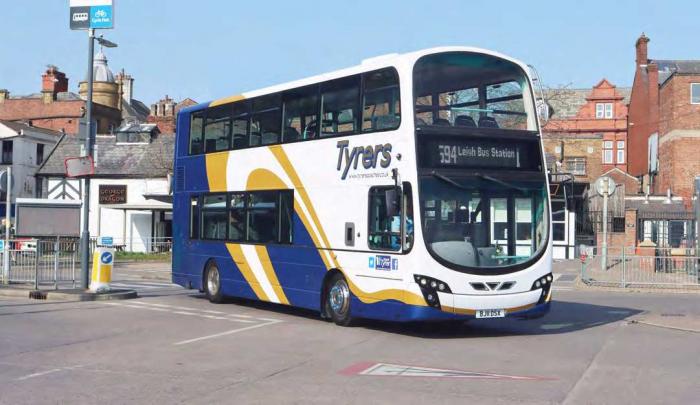 The 594 (Leigh -Bedford/Tyldesley circular) is Tyrers’ only normal public service route scheduled for double deck operation, with the bus working the route on weekdays between school duties.
RUSSELL YOUNG

The first new coach quickly followed in July 1973 as Plaxton Panorama Elite III-bodied Ford R1114 (BTE 899L) which allowed Bob to expand into coaching work further afield. Bob retired in 1990 and half of the firm, which had grown to five vehicles, passed to his daughter, Sylvia, who continued where Bob left off along with her husband Gordon. The other half passed to his son, Robert, and later became Tyrer Tours of Nelson, with the coaching side later bought by Fraser Eagle and the buses by Holmeswood. They were also the business behind Maytree Travel in Bolton. Sadly, Bob passed away in 1992. Sylvia and Gordon were later joined by sons Richard (now managing director) in 2000, and Matthew (now commercial director) in 2009. Gordon passed away in 2018.