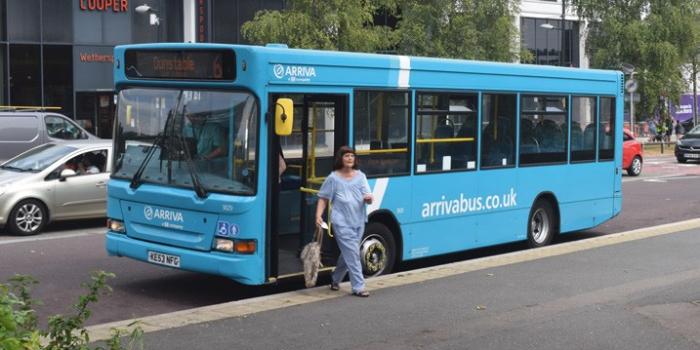 A passenger alights from Arriva the Shires 3829 (KE53 NFG), a TransBus Mini Pointer Dart, on route 6 in Dunstable.
DAVID JENKINS

Alterations to Arriva the Shires’ network at the end of July have further reduced the company’s presence in Buckinghamshire.

Withdrawal of interurban route 61 between Aylesbury, Tring and Dunstable reduces links with the company’s Bedfordshire and Hertfordshire services, which now only meet each other at Hemel Hempstead and Leighton Buzzard. The 61 served all three counties.

Described in 2012 by Bradt Guides as ‘one of Britain’s 50 favourite bus routes’, reflecting its scenic route through the Chilterns Area of Outstanding Natural Beauty, the 61 is an example of death by a thousand cuts.

Originally the service continued to Luton, and offered an hourly service that was further extended to the airport. In autumn 2013, when Luton area services were revised upon opening of the guided busway, it was diverted away from the airport, and then cut back to the town centre in early 2014. A year later, it was further truncated at Dunstable, though with through fares to Luton available by changing on to Busway services.

In May 2016, the headway was reduced from hourly to 90min, enabling it to be operated by two buses instead of three. Arriva now says: ‘This service is being withdrawn as unfortunately it is no longer commercially viable.’

A replacement to a similar timetable has been provided commercially by Red Eagle, though with diversions in Aylesbury to serve areas no longer covered by Arriva route 50, which has also been withdrawn. The changes leave Arriva operating just one town service in Aylesbury, with all the rest in the hands of independents.