Glasgow and Salisbury have ushered in the 2020s with small pioneering batches of zero-emission battery electric single-deckers that at least one of those cities hopes will be the norm in 10 years’ time.

Electrification of the UK’s bus fleets — especially outside London — may still seem to be painfully slow and the numbers of vehicles involved almost tokenistic, but even in places where single figures of zero-emission vehicles are entering service, the ambition to operate much greater numbers is palpable. 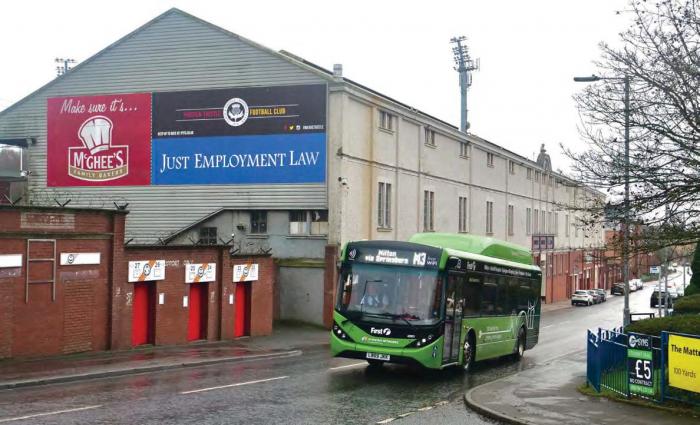 First Glasgow 48901 (LB69 JKK), one of two BYD/Alexander Dennis Enviro200EVs, passing the Firhill home of the Scottish Championship’s Particle Thistle Football Club on route M3. This also was the northernmost point of Glasgow’s last trolleybus service. Its Queens Cross terminus was in Northpark Street, which 48901 is about to pass, reached on a one-way loop along this short stretch of Firhill Road.
PHIL HALEWOOD
one

The first two such projects in 2020 — in Glasgow and Salisbury — are cases in point. First Bus put two 10.8m BYD/Alexander Dennis Enviro200EV single-deckers into service in January on a meandering hourly service through some northern districts of Glasgow, a city whose politicians are talking of a move to 100% zero-emission vehicles within the next 10 years.