Thamesdown relaunches and hits back at Stagecoach

Three months after its acquisition by Go South Coast, Thamesdown Transport launched its new identity on 14 May and hit back against competition from Stagecoach by starting a route between Swindon and the town of Royal Wootton Bassett.

Also new within Swindon is cross-town service 5 (Haydon Wick-Park North), which partly replaces two Thamesdown routes and competes with similar Stagecoach service 3, which started on 2 April in competition with Thamesdown.

As part of these changes, bus shelters at the main town centre stops in Fleming Way have been given a makeover with the new branding, while new-style bus stop flags have been erected along the R1 route.

Go South Coast has also re-equipped the entire fleet with Ticketer ETML-V7 ticket machines, replacing Wayfarer TGX200s. These will allow for contactless payment to be introduced later this year. 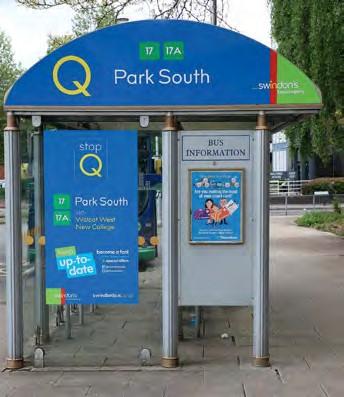 One of the new-look bus shelters on Fleming Way.
DAVE RUSSELL/ DERIC PEMBERTON