The overnight visit of a wheel forward Volvo electric bus from the Swedish city of Gothenburg formed the cornerstone of Transdev’s launch of a five-year vision to turn Harrogate into Britain’s first low-emission town.

Chief executive officer Alex Hornby says that within 12 months The Harrogate Bus Company’s new and refurbished buses will at a minimum meet Euro6 emission standards. Eight Volvo 7900 electric hybrids and OppCharge charging infrastructure are expected at the end of the year, funded by £2.25million from the government’s Office for Low Emission vehicles (OLEV) and £1.7million by Transdev.

Transdev already has two electric Optare Solos in Harrogate, and new charging facilities will be added at Starbeck depot and the town’s bus station for the Volvos. The high-level charging stations — capable of accommodating electric double-deckers in the future — will be built at the bus station this year.

The French-owned group has also refurbished 10 Wright Eclipse Urban-bodied Volvo B7RLEs at its Blackburn workshops. These single-deckers, dating from 2004- 07 and used on service 1 (Harrogate- Knaresborough), have new new seating, Eclipse 2 fronts, ramps, LED lighting, USB points at every seat and an Eminox SCRT exhaust, which eliminates over 96% of nitrogen oxides (NOx).

Government funding will see similar NOxcutting technology fitted in buses refurbished for routes 770/771 to Wetherby and Leeds in partnership with Leeds City Council. By the end of next year, contactless payment will be available on all routes. This already is available on flagship route 36 (Ripon-Harrogate-Leeds), which it says was the first outside London to go contactless.

Transdev also is creating a mobile phone app that will combine real-time journey planning and ticket purchase. It is testing advanced touchless solutions – beacon mobile ticketing, which calculates the fare via beacon technology, and caps return, day and weekly travel — all using a phone app. 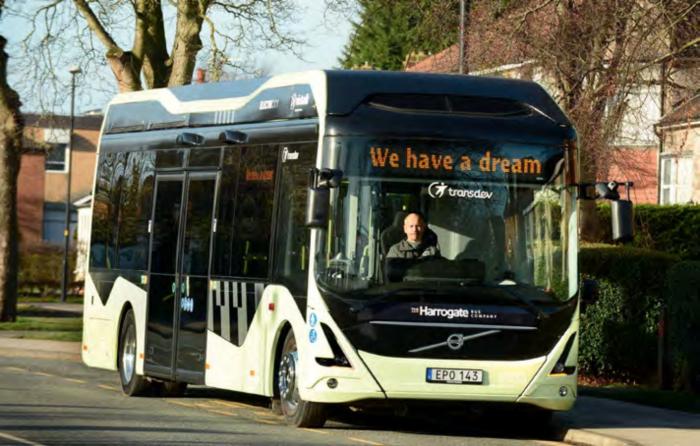 The Volvo electric bus, with centre doors and centrally positioned driver’s controls, in Harrogate. The eight Volvo 7900s on order will be conventional right-hand-drive vehicles with a front entrance. TRANSDEV