PAUL CHANCELLOR uses photographs from the Colour-Rail photograph collection showing that although railway and road bridges continue to frame the site 50 years on, the buses serving this Greater Manchester town in historic Cheshire have changed shape, colour and even their means of propulsion 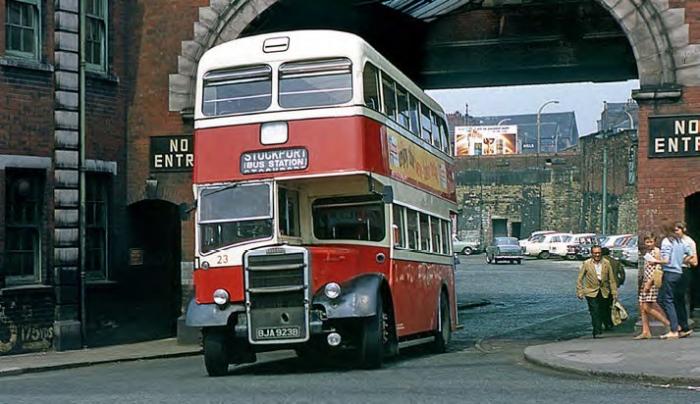 Stockport Corporation 23 (BJA 923B), an East Lancs-bodied Leyland Titan PD2/40 that became Selnec 5823, heads for the bus station. Other than nine single-deckers, the Stockport fleet was made up entirely of halfcab double-deckers, most of which had rear platforms. Only the last six of a final batch of 12 G-registered East Lancs-bodied PD3/14s delivered in 1969 had forward entrances. 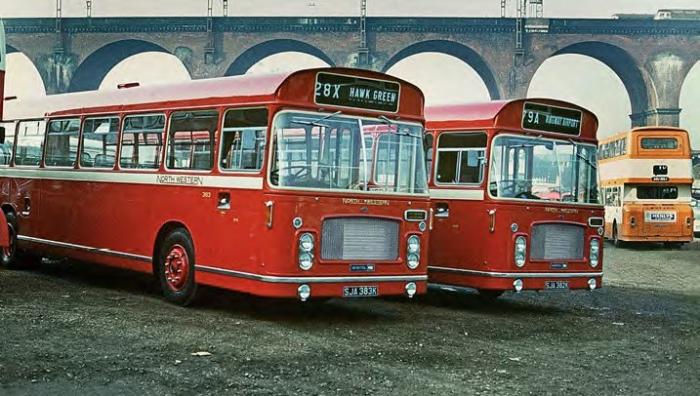 The railway viaduct forms the backdrop to this view of North Western 383 (SJA 383K) and 382 (SJA 382K), brand new ECW-bodied Bristol RELL6Ls delivered in October 1971, which became Crosville SRL248 and SRL247 when Macclesfield and Northwich garages changed hands the following year. The destination blind on 382 is set for Ringway Airport, a name largely forgotten for today’s Manchester Airport. Behind them, Selnec orange and white adorns 5199 (ABU 199J), a Roe-bodied Leyland Atlantean ordered by Oldham Corporation and new in May 1971. 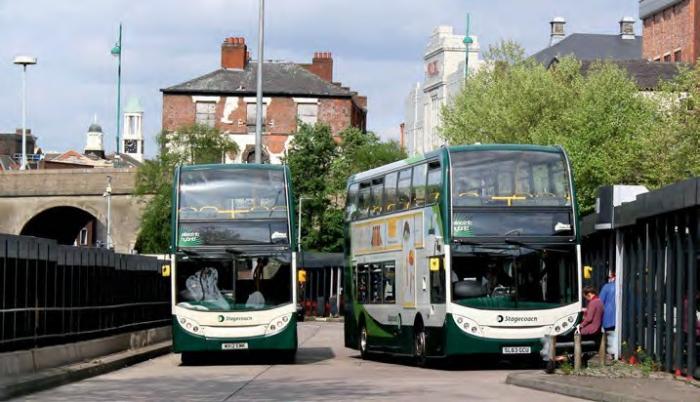 Green Bus Fund money helped Stagecoach Manchester purchase 128 Alexander Dennis Enviro400H hybrid electric double-deckers between 2010 and 2014, which all originally wore a two-tone green version of Stagecoach corporate livery. This 2016 scene in the bus station, with the bridge carrying the A6 behind them, shows 12108 (MX12 EMK) passing 12248 (SL63 GCU).

With the mayor of Greater Manchester considering a franchising regime for the city region’s bus services and Transport for Greater Manchester releasing plans (August Buses) to build a new interchange with rooftop park on the site of existing Stockport bus station, a follow up to this feature in 10 years from now could yield further dramatic change.