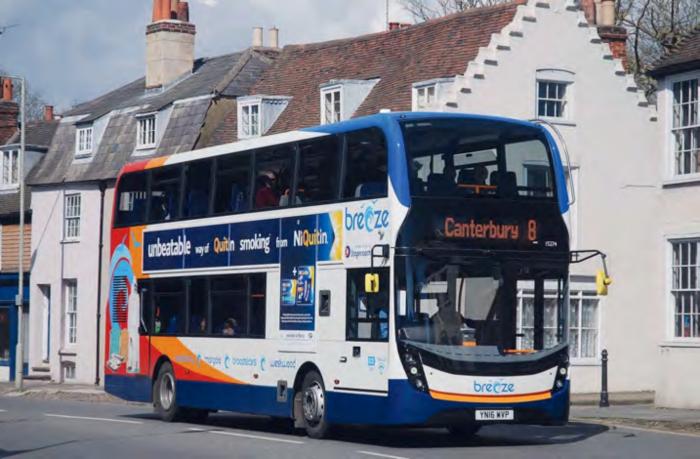 Stagecoach has confirmed industry expectations that fewer new vehicles will be delivered across the UK this year. At £70million, its 2017/18 order is worth 27.5% less than in 2016/17 and the number of vehicles being bought is down by 28% from 478 to 344. Alexander Dennis and Plaxton will finish 91% of them, Wrightbus most of the rest.

Last year’s larger order helped Stagecoach complete the replacement of non-compliant double-deckers ahead of the 31 December deadline for the UK’s local bus fleet to meet the accessibility requirements of the Disability Discrimination Act.

Two thirds of that order was for doubledeckers. It has again ordered more of these than single-deck buses or express coaches, but these 188 account for 55.4% this time. Of these, 181 will be Alexander Dennis Enviro400 MMCs — 122 with the manufacturer’s own Cummins-engined chassis built in Britain and 59 with Scania N250UD chassis. The Euro6 Scanias are the first ordered since an initial batch of 30 entered service in Kent last year as part of the 2015/16 order.

The other seven double-deckers are the already announced Wright Gemini 3-bodied Volvo B5TL part open-toppers for the Lake District, due in the summer (Buses last month).

A further 102 Alexander Dennis Enviro200 MMC single-deckers — 62 longer wheelbase models, 40 shorter ones — take the manufacturer’s total to 283 buses or 82% of the order.

The Plaxton coach division will build Elite bodies for 31 of 34 Volvo B11Rs being bought mainly for interurban bus, Scottish Citylink and Megabus.com services; 19 of these will be two-axle 12.5m models, eight will be 15m triaxle versions and nine further 15m tri-axles will have Elite-i inter-deck bodies.

The other three B11Rs, also tri-axle, will have National Express-specification Caetano Levante bodies.

The balance of the bus order favours Wrightbus over Optare, which has missed out after successive years in which Stagecoach has bought diminishing numbers of Solos and Versas.

Besides the open-toppers, there will be two additional Wright Eclipse 3-bodied Volvo B8RLEs with guidewheels for the Busway in Cambridgeshire and 18 of the StreetLite Max 11.5m micro-hybrid single-decker for Sheffield, an order part funded by the UK government’s Office for Low Emission Vehicles (OLEV).

All 344 will be equipped with USB charging points and most will be WiFi enabled.