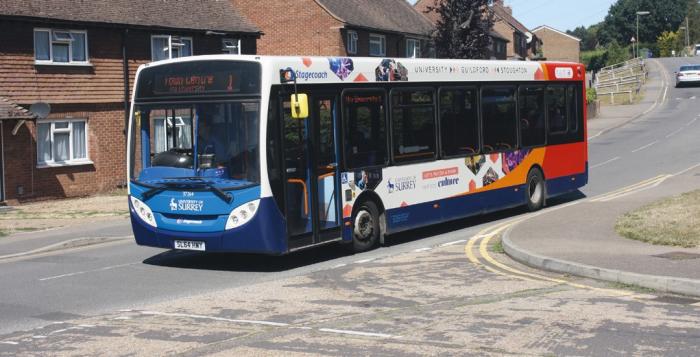 Stagecoach South significantly increased its presence in Guildford at the end of July, partly at the expense of Arriva Southern Counties.

New routes 1 and 2 now provide the primary link every 10min to the Surrey University campus and Royal Surrey Hospital, from where four buses are extended each hour back to the bus station via a circular route. Ten are needed to work the services.

Arriva has been forced to withdraw its 26/27 circular services from the university campus, but will continue to run the rest of the route, with frequency reduced from every 15min to every 20min. The revised route shortens round trips by 10min.

Stagecoach plans further enhancements for when university term time starts in October, including an hourly night service on Mondays to Saturdays and additional service 1X that will increase headways up to every 5min at certain times of the day.

The hospital to town centre corridor is also contested by Safeguard Coaches, which offers four direct buses per hour; with the addition of Stagecoach, the previous service of eight buses each hour rises to 13.