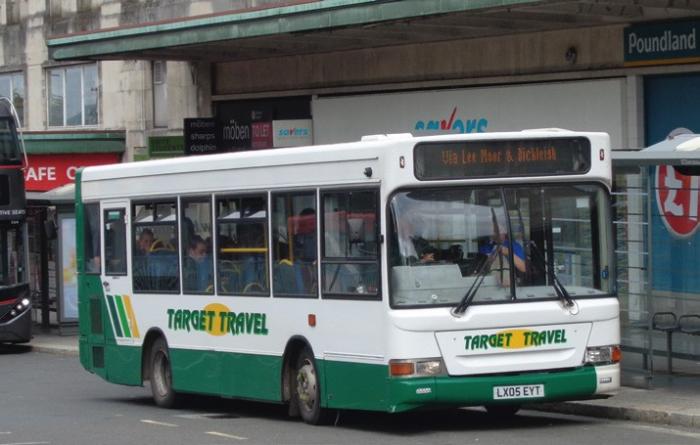 Stagecoach South West expands in Plymouth on 29 October after securing the majority of the city council’s supported route contracts, requiring an extra 11 vehicles and taking it into new areas.

Coincidentally, Plympton independent Target Travel’s 40-vehicle operator licence was revoked from 23.59 on 27 October at a traffic commissioner’s public inquiry on 10 July owing to a lack of financial standing. The nomination of a new transport manager was accepted and it has since applied for a new 20-vehicle O-licence.

The contract awards incorporate some improvements and follow a council review of patronage and travel patterns.

The 14 is currently run by Go-Ahead Group’s Plymouth Citybus on Mondays to Saturdays, requiring two vehicles; it will be extended, restoring services through Derriford estate. The 52 will incorporate the 39, creating new Plympton-Estover-Derriford Hospital-Compton-City Centre links.

Stagecoach’s new routes will increase its coverage of the city, giving it a presence in many new areas such as Devonport and Plympton.

Citybus remains the dominant operator and gains two replacement contracts for its commercial routes 28A and 50A/51A being withdrawn from Mainstone and Holly Park.

Stagecoach is not proposing any commercial enhancements but will renumber some routes and include them in its daily and weekly tickets.

Stagecoach South West commercial director Robert Williams says: ‘We are pleased to have been awarded a number of contracts from Plymouth City Council as part of its recent round of tendering. It was part of the council’s usual cycle that has been underway for quite some time now, and was not linked to the much more recent traffic commissioner activity against Target Travel.’

The number of staff required is not yet known but recruitment is already underway and some Target employees will qualify for TUPE, Transfer of Undertakings (Protection of Employment) Regulations.

Vehicles will be Alexander Dennis Darts and Optare Solos from its reserve fleet allocated to its large Plymouth depot acquired from First in 2015.

From October, Stagecoach will also serve the new town of Sherford, where 5,500 new homes are being built east of Plymouth, as an extension of its cross-city service 2A (Saltash- Elburton) every 20min. An additional Enviro200 will be cascaded from Exeter.

Williams explains: ‘The extension of the 2A was our proposal, extending our existing commercial service as a more attractive option than running a standalone service. It will cover the first couple of phases of a Section 106 agreement with the council to pump-prime services to the estate during its construction.’

Plymouth City Council adds: ‘Where many councils across the country have been reducing or withdrawing their bus subsidies, we are really pleased to have retained our full network, with only minor changes, as well as being able to replace services being withdrawn by commercial operators and introduce a new service into Sherford.’

Following the public inquiry, Devon County Council is also retendering its Target contracts in Tavistock and the South Hams.

■ Exeter-based coach operator Hamilton Gray also had its 11-vehicle operator licence revoked from 23.59 on 31 October at a public inquiry on 11 July owing to a loss of financial standing. It once operated Megabus.com services for Stagecoach using vehicles in Megabus livery.