An Optare Spectra-bodied DAF DB250 celebrates an all-time favourite BBC television comedy in its new role as a fast food diner at Lydney in the Forest of Dean, with Welsh and English flags acknowledging its closeness to the border between the two home nations.

R873 MDY was one of a dozen late model step-entrance Spectras that council-owned Eastbourne Buses bought from the Arriva Bus & Coach dealership in 1998 and which ran more recently with Tanat Valley Coaches in Shropshire. At one point in its life in Eastbourne, it wore a blue and green livery with The South Downs Connection branding. 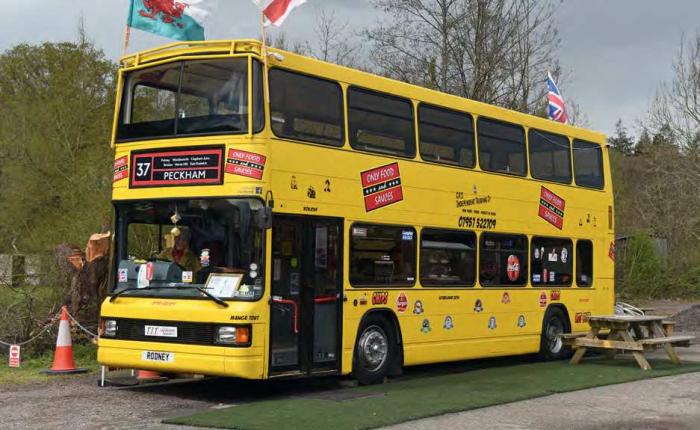 As Daniel Stazicker’s pictures show, it now evokes memories of Del Boy, Rodney and Trotter’s Independent Traders in Only Fools and Horses, in the ownership of Ca’s Independent Trading Company which operates as Only Food and Sauces. It is painted in the same yellow as Del Boy’s threewheel Reliant Robin van and displays his catchphrase “Mange Tout” on the nearside front corner, while the front numberplate is named in honour of his hapless and long suffering kid brother Rodney.

True to the theme, the front destination display is for Peckham, complete with accurate and authentic route number and intermediate points for the orbital 37 service linking south-east and south-west London.