Routine retendering by Transport for West Midlands has seen a significant loss of work by Rotala-owned Diamond and the end of its Signature brand applied to services in the Solihull area.

Signature was introduced in conjunction with PTE Centro in 2010, using highquality buses with leather seating and Wi-Fi, when such features were less common than today. It was also a trial for smartcard ticketing before Centro launched the Swiftcard.

The brand was retained at retendering in 2013, but the new pattern starting in late February leaves Diamond with only routes A1 and A2, which replace the Signature S1 and S11. The remaining local services are replaced by a revised network, with six (A3 to A8) won by Landflight, adding to the one route already held. A further service is replaced by a diversion of Igo route 69.

It is obtaining three new Alexander Dennis Enviro200s for the services, with three existing Euro5 buses to be upgraded to Euro6.

However, Diamond has taken over route 42 in Coventry from Johnsons, which previously worked it as part of the contract for route 87. Additionally, Diamond has given notice that its X30/ X31 services in Coventry will be reviewed in April. 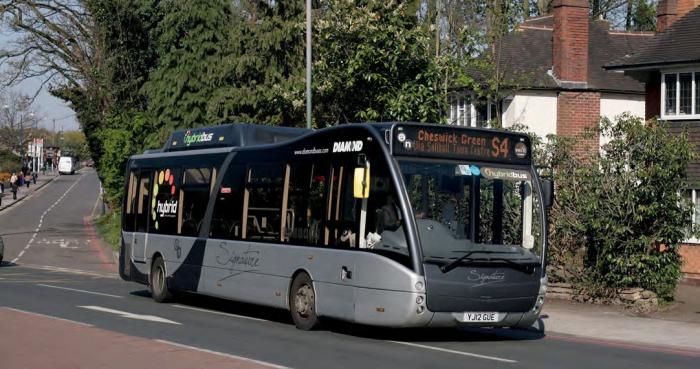 A 2014 view of Signature-liveried Diamond 30128 (YJ12 GUE), a hybrid Optare Versa, near Solihull station on route S4. Rotala has since sold its hybrid Versas.
MARK LYONS