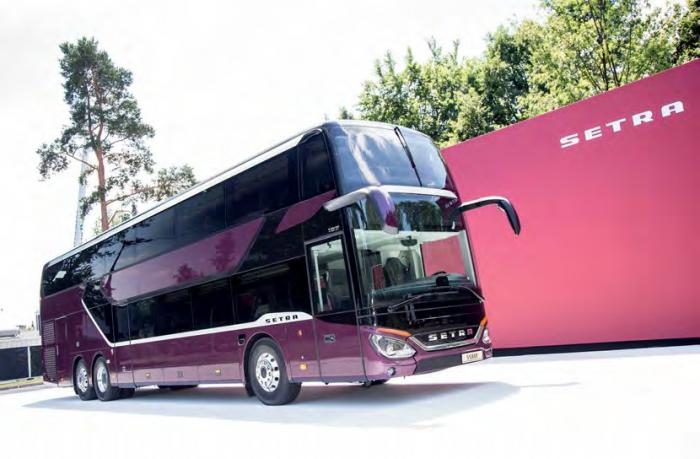 Hard on the heels of the new Mercedes-Benz Tourismo RHD high-decker coach (Buses last month) comes the range-topping S531 DT double-decker from the German maker’s Setra luxury division. The new integral coach broke cover at a preview in Stuttgart, but will not be built in right-handdrive. The 500 Top Class line-up gets sleeker with every edition and Setra says the flagship 14m S531 DT also uses 10% less fuel than the previous model thanks to aerodynamic improvements. It boasts a benchmark drag coefficient of 0.35 CD.

According to Setra, the S531 DT — built at Neu-Ulm in Germany — will save roughly 3,000litres of fuel if driven annually for 100,000km (62,000miles). The fluid shape contributes to the savings along with modifications to the 12.8litre OM471 in-line, six-cylinder diesel engine.

‘The Setra double-decker is the biggest and most comfortable touring coach from Daimler Buses and the clear market leader in its segment,’ says Daimler Buses head Hartmut Schick. Daimler no longer sells Setra products in the UK and a right-hand-drive doubledecker for British roads is not in the pipeline. The 78-seater can be ordered with luxury features such as a kitchenette and washroom through to extra stowage space (maximum 296cuft/8.4cum).

There is now even a fragrance dispenser taken from the Mercedes-Benz S-Class limousine. The system works as soon as the ignition is turned on and one of the coach doors is left open. Boarding passengers are greeted with one of six fragrances ranging from what Setra calls ‘fresh and sporty’ to ‘a heavier scent that reminds one of leather’.

This is combined with the Sideguard Assist anti-blindspot aid already used on Mercedes- Benz trucks. This uses radar sensors to scan the lane to the right of the coach when the driver is turning off or cornering. The driver is warned if pedestrians or cyclists are moving along the side of the vehicle.

The shape of the Setra double-decker has evolved steadily from the S228 DT launched in 1981. Setra stands for ‘selbsttragend’, German for the self-supporting integral construction adopted in the 1950s.

A hallmark of recent Top Class editions is the rearward-facing ‘La Linea’ aluminium effect strip on the sides, which starts behind the driver’s window and the front door, with the Setra badge incorporated before extending horizontally and upwards to the edge of the roof.