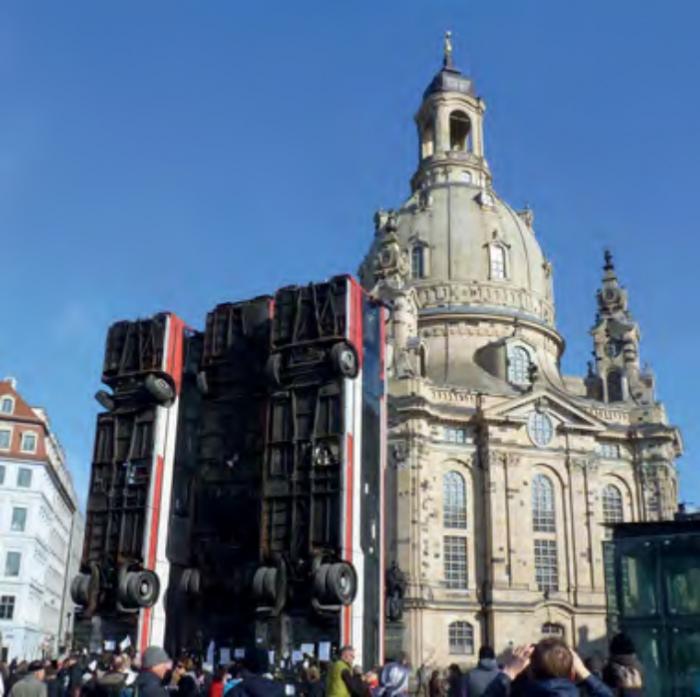 Three scrap buses propped up vertically in front of Dresden’s rebuilt Frauenkirche have been booed and praised alike by citizens of the eastern German city.

The rusty 20-year-old single-deckers installed by Syrian-German artist Manaf Halbouni, a resident of Dresden, are designed to mirror an anti-sniper barricade in Aleppo, Syria and to highlight the destruction caused by modern war.

The two MAN A15 gas buses and a diesel Neoplan N4016 used for the sculpture once operated in Nuremberg and Bayreuth.

They were stripped of their seats and engines and reinforced with steel girders before cranes lowered them into position on concrete plinths in front of the church on 6 February. The installation cost €57,000 (£48,700) and remains in place until early April.

The mainly crowd-funded sculpture called Monument has enraged some citizens who say it belittles the suffering of Dresden where February 1945 Allied air raids caused a massive loss of civilian life. The Baroque Frauenkirche stood as an empty shell before a 15-year reconstruction project was completed in 2005.

Supporters and critics have attached hundreds of leaflets to wire mesh at the rear of the upturned buses.

‘This work is a symbol to remind people that the Frauenkirche did not always look as it does now,’ Halbouni (32) told MDR television. ‘I wanted to create a counterweight to this reconstructed square which I knew as a child when it was still in ruins.’

Brief You Tube videos on Halbouni’s website https://www.manaf-halbouni.com/work/monument/ show the artist and his assistants dismantling the buses before they were brought to Dresden.