Reading Buses steps in to save Berkshire Green Line 702 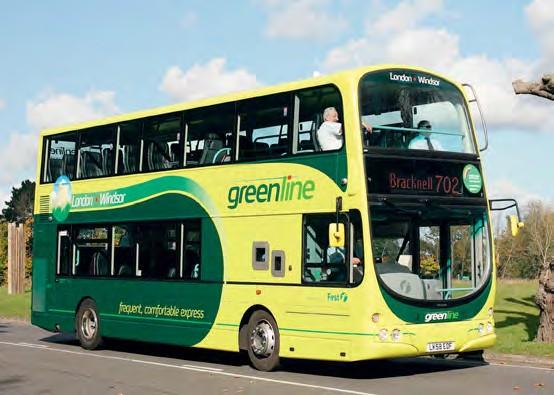 A new round of economies at First Berkshire will see it withdraw from Green Line route 702 (London Victoria-Bracknell) after service on 23 December, with four other routes due to be withdrawn and a fifth reduced in frequency and hours of operation all from 20 January.

It says that increased operating costs made the 702 — the last Green Line route not operated by Arriva — unsustainable.

The January cuts will see it withdraw routes 5 (Slough-Cippenham), 10/11 (Eton Wick-Heathrow Terminal 5), 15 (Slough-Eton Wick) and 200 (Windsor-Legoland). It has sought Transport for London’s authority to reduce the daytime frequency on route 7/N7 (Slough- Heathrow Airport via Langley) from six an hour to four and to withdraw the N7 journeys between 12.15 and 04.01.

‘A comprehensive review of our network performance identified a number of services weren’t covering the cost to operate them and were loss making’, says First.

‘In some cases we can ensure a service is made more commercially sustainable by changing the frequencies in line with reduced demand, but the challenging operating environment meant we saw no other option but to withdraw a number of services because there is not enough demand to be viable. Ultimately we need sufficient customers during the day to run a service.’

Slough Borough Council says it hopes to secure another operator for one or more of the services being withdrawn in January. It says its top priority is route 5, which is the only bus serving Cippenham and Cippenham Green.

There is better news of the 702, which council-owned Reading Buses will replace from 27 December, initially operating to broadly the same timetable as now but with morning and evening extensions to Reading. More detailed research into the timetable, reliability, branding and marketing will be undertaken before a full relaunch of the service later in 2018.

The 702 has a peak vehicle requirement of six, plus a spare bus, and the initial allocation will comprise two or three Alexander Dennis Enviro400 MMC double-deckers with highback seats from its current fleet, together with two Caetano Levante-bodied Scania coaches new to National Express and some tri-axle Scania OmniLink single-deckers being hired from Stagecoach.

It intends to continue using the Green Line brand and one of the double-deckers will be painted in an updated Green Line livery in time for the launch. The other vehicles are likely to operate in white with Green Line branding.

In the longer-term, it will obtain vehicles that meet the requirements of the London ultra low emission zone. With that in mind, it intends to evaluate various demonstrators in early 2018.

This is Reading Buses’ first scheduled service operated in London since it withdrew the Londonline coach service in May 2000.