READING BETWEEN THE LINES 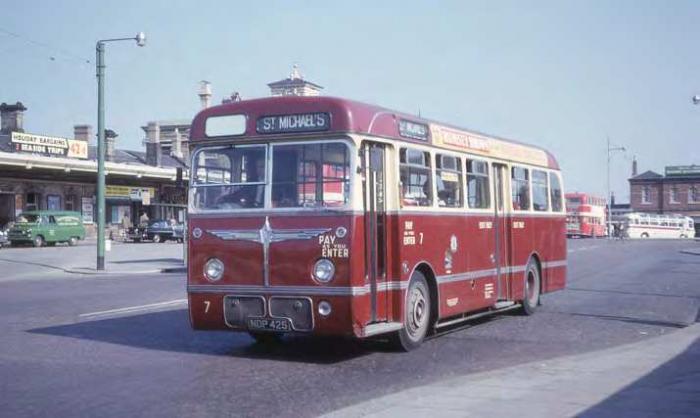 Typical of Reading’s single-deck fleet in 1963 was 7 (NDP 425), an AEC Reliance with 34-seat dual-door standee body built by Burlingham in Blackpool. A green Bedford CA van and black Vauxhall car are in the General station, while a Bristol MW coach and a Lodekka FLF from the Thames Valley fleet are closer to the Southern station. An advertisement at the General station promotes three summer seaside train trips for 42/6d (£2.02½p or £43.46 at today’s prices).
IAIN MACGREGOR

In one of the better examples of public transport integration, a focal point of bus services in Reading was — and remains today — the town’s railway station.

Actually stations plural in past decades, as the facilities for the separate Great Western and Southern lines (Reading General and Reading Southern) were next to each other, with bus stands in front. Extra platforms were built in the General station in 1965 and 1975 to accommodate the Southern trains and it has been greatly rebuilt since then, culminating in a £400million expansion and redevelopment completed in 2015.