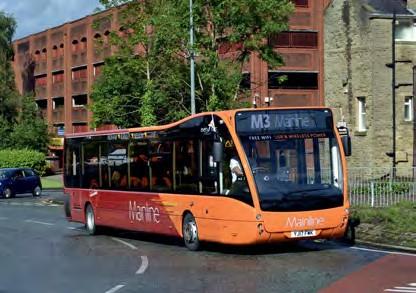 Transdev relaunched its four-route Mainline network at a family fun and enthusiast event — The Big Burnley Bus Bash — on 23 July, when it also officially unveiled The Burnley Bus Company as the trading name of what previously was Burnley & Pendle.

This also was the launch day for 30 new Optare Versas purchased in a £4.5million investment in the sevenday routes connecting Burnley with Nelson, Colne, Padiham, Barnoldswick, Clitheroe, Accrington, Trawden and Keighley, running up to every 7min.

The 41-seat Versas are equipped with free 4G WiFi, USB power points at every seat, wireless charging pads and mini tables. Wright-bodied Volvo singledeckers displaced from Mainline are being refurbished for other Transdev routes.

This order — along with one from stateowned Translink in Northern Ireland for 27 Versas and 13 Solos — has also helped provide some comfort for Optare, which has been losing market share in the single-deck market, mainly to the Alexander Dennis Enviro200.

Other than these 70 vehicles, figures collated by Bus Lists on the Web for the first half of the year show that it delivered just 17 Solo, nine MetroCity and four Tempo products to British operators. The Tempos were from a cancelled Australian order.

The winners of the competition in June Buses for tickets on the London Transport Museum Friends visit to Imberbus on 26 August were Terry Kirby from Leicester and Wayne Gilmore from Barnsley.