Poor publicity and low bus use: cause and effect? 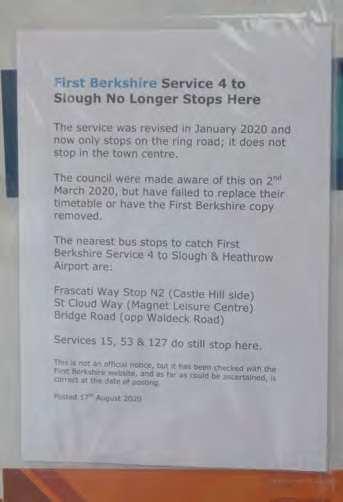 You ask in most editions for examples of poor, or indeed good, publicity for bus services. The main photograph shows the four bus stops, three of which are in use, in Bridge Avenue, Maidenhead. They serve as a sad reminder of the large, crescent-shaped Thames Valley bus station which used to stand in the space now occupied by the buildings beyond.

This had all the facilities one would have expected of a British Transport Commission bus station of its time, and was supplemented by a coach station in York Road, roughly behind where the photographer was standing. The phrase ‘how the mighty are fallen’ comes to mind.

These photographs were taken on 11 November. One of the others shows a notice stuck over the timetable for First Berkshire service 4 to Slough and Heathrow, arguably Maidenhead’s principal bus service. It points out that the service last served this stop 10 months previously, and that the Royal Borough of Windsor & Maidenhead, which is responsible for these stops, was notified of the fact more than nine months before the photograph was taken.