Once part of the British Electric Traction group and a management buyout for nearly 19 years after privatisation, the Barnsley company with a fondness for lowbridge Leylands today is part of Stagecoach

In turn, it had begun life in 1902 in the BET group as tram operator called the Barnsley or & District Electric Traction Company, introduced its first motorbuses in 1913, dropped Electric from its name in 1919 and withdrew its last trams in 1930. 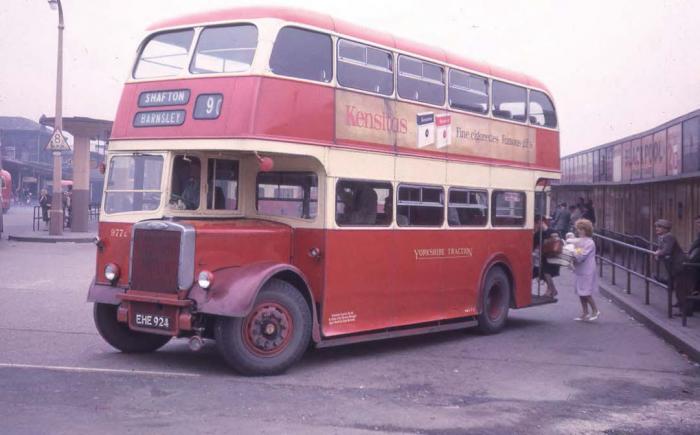 Two women, one laden with at least three bags, the other holding a baby, clamber on to the rear platform of 977 (EHE 924), a 1953 Leyland Titan PD2/12 with lowbridge Northern Counties body, away from its platform at Barnsley bus station. Once aboard, they will have a choice of riding downstairs with a low ceiling above the offside window seats or negotiating the stairs to reach the sunken offside gangway and four-abreast bench seats. Smoking will be permitted upstairs, just as it was advertised with the lure of gift coupons and no health warning on the side.
IAIN MacGREGOR 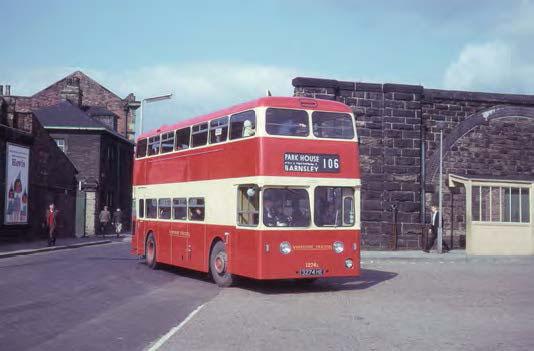 One of the newest double-deckers in the fleet, into service five months earlier, was Leyland Atlantean PDR1/1 1274 (3274 HE) with 72-seat Weymann lowbridge body, photographed as it turned into the bus station. Its layout would be less daunting, with a flat floor into the lower saloon ahead of the rear wheels and a much shorter sunken upper deck gangway confined to the nearside rear.
IAIN MacGREGOR

In National Bus Company ownership from 1969, one of its first acts was to absorb the smaller Mexborough & Swinton and County Motors fleets. It was sold to its management in January 1987 and, as Traction Group, went on to acquire Lincolnshire Road Car from NBC and Strathtay from the Scottish Bus Group. It acquired several businesses on its home patch, including South Riding, Andrews and Sheffield Omnibus.