Past pictures that lack a pointer to the present

Hugh Dougherty is impressed that the recently refurbished subway beneath the platforms at Kilmarnock railway station includes a honeycomb of pictures of buses and trams among historic scenes of the Ayrshire town’s life and times.

The bus scenes include the old Western SMT bus station, which Hugh remembers as ‘hellish’ during his time as a Western driver at Thornliebank in 1972. It had been built for 7ft 6in-wide buses, and the challenge was to take an 8ft-wide Leyland Titan PD3/3 or Daimler Fleetline through without leaving either or both mirrors behind.

There is also the late-lamented A1 Service bus station, a goodly selection of bus types to stop and examine, and even a Kilmarnock Corporation tram.

However, while he says it is wonderful to see old buses recalled in the railway station, something fundamental is missing that might benefit present day travellers: an arrow pointing in the direction of today’s bus station.

Indeed, the Glasgow & South Western Railway Association, which houses its archive in a platform office above the subway display, has pictures of early G&SWR bus services that integrated with trains…as early as 1903. 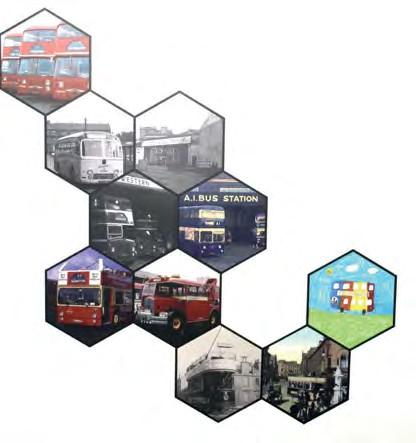