The coronavirus pandemic led to a massive and rapid reduction in provision and use of bus and coach services across the UK from mid-March as the public was instructed to stay indoors and work from home wherever possible in order to reduce the risk of infection and lessen the impact on the National Health Service. 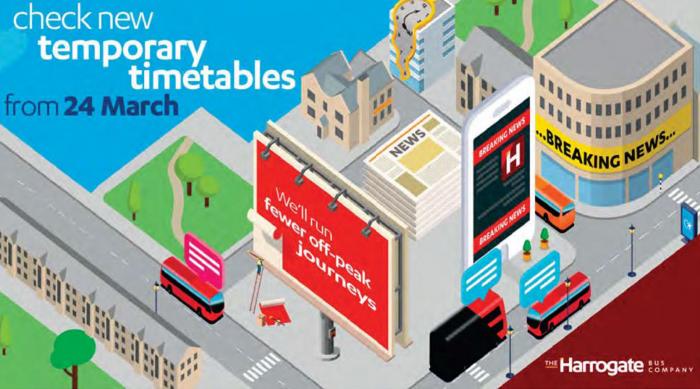 Following the short notice closure of most schools on 20 March, many operators moved immediately to reduce services, generally turning to either school holiday or Saturday service levels. Go North East and East Yorkshire introduced a modified Sunday service from the start.

The announcement of severe restrictions on the reasons to travel from 23 March then led many operators to reconsider their service levels, in the light of greatly reduced patronage.

Nottingham City Transport introduced emergency schedules on 25 March, reducing to a core network of 20 routes and requiring exact fares only on three of these - including the South Notts service to Loughborough and the Pathfinder to Southwell - on which it previously gave change. It also postponed a fares rise planned for 29 March.

NCT said it was trying to achieve a balance between containing the spread of the coronavirus among its staff and customers and meeting its obligation to enable the essential journeys that some people still needed to make.

It rapidly admitted ‘there were some bits we didn’t get right’, and in particular, has added earlier journeys to some routes.

Unprecedented falls in passenger numbers have taken place, with Centrebus quoting loadings of 15% or less. By 29 March, Transport for West Midlands reported an 86% reduction from the start of the month in the number of journeys made using its Swift card, which accounts for a quarter of bus, tram and train trips in the region. It hoped that figure would fall farther, saying: ‘A small minority of travellers are still making non-essential journeys.’

Lothian Buses revealed numbers had fallen by over 90%. It introduced a ‘critical services network’ of half-hourly and hourly services from 29 March, which interim managing director Nigel Serafini says was developed when teams across the business analysed customer travel patterns and feedback to ensure that it could continue to operate vital links for key workers across Edinburgh and the Lothians.

As well as reducing services, Go South Coast turned off its on-board Wi-Fi, saying that its provision ‘does come at a cost to our business and, like most companies right now, we are doing our best streamline our costs’.

It introduced a second emergency timetable on 29 March, with off-peak service levels cut even farther. Bluestar 1, for example, linking Southampton and Winchester, and which normally operates at 15min intervals, was first reduced to half-hourly, but aside from a two-hour morning and afternoon peak, will now only run hourly.

First Hampshire & Dorset’s Wessex services in Weymouth and Bridport have been cut back to four routes, with many suspended and the Jurassic Coaster network decimated.

From 29 March, a Sunday timetable with additional key worker journeys operated on routes 1 (Weymouth-Portland), 2 (Weymouth-Littlemoor) and 10 (Weymouth-Dorchester), providing links north and south of Weymouth but none west to Chickerell or east to Preston, as four town routes were suspended along with seasonal services.

Several communities were cut off, with only a three-hourly Axminster-Bridport Jurassic Coaster X53 surviving and no buses east from Bridport to Dorchester or Weymouth.

Many of the larger groups have invited key workers to contact them if their travel needs are not being met, and some timetables are being modified to reflect this. Bluestar added an extra early morning journey to its route 17 serving Southampton General Hospital, adjusting another route to give a connection in the city centre.

Some operators are accepting each other’s tickets. First and Arriva are co-operating on routes in Leicester, and Arriva also has a temporary arrangement with Midland Classic, which is still covering the Swadlincote-Burton section that Arriva has suspended for the time being.

Beginning in the West Midlands, free concessionary travel has been made available in most parts of England before the usual 09.30 start time so that older people could access dedicated shopping hours in supermarkets, mainly between 08.00 and 09.00. Some operators, including Centrebus and Adventure Travel, have provided free travel for NHS workers.

The UK, Scottish and Welsh governments have promised additional funding.

The crisis prompted Halifax minibus operator T. J. Walsh to close on 24 March, saying many of its drivers were over 70 and in the at risk group required to socially isolate. Berkhamsted-based Little Jim’s Buses suspended operations from 22 March to protect its septuagenarian drivers.

■ Bus stations in Durham, Middlesbrough and Swansea have been closed to enforce social distancing, with services moved to nearby streets.