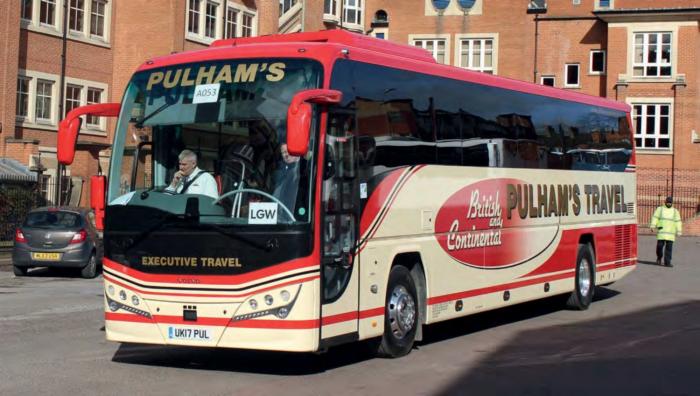 UK17 PUL, a new Plaxton Panther-bodied Volvo from Pulham’s of Bourton on the Water, leaving Gloucester Green bus station in Oxford during the strike on 2 March, on the Airline service to Gatwick. GRAHAM LOW

Oxford Bus Company — which also is locked in a pay dispute with the Unite union — is to axe its BHX Airline coach route to Birmingham Airport at the end of March, after eight months’ operation.

The Birmingham route offered 10 journeys a day, seven days a week, including an 04.00 arrival at the airport for early morning flights. There was also through ticketing to Coventry and Birmingham city centres by changing on to National Express West Midlands buses.

It tried to stimulate traffic to the tourist destination of Warwick, as well as students from Warwick University (which is in suburban Coventry). The operator says: ‘The service has not carried enough passengers to cover its costs of operation and this has resulted in an unsustainable loss for our business.’

The BHX route faced competition from Arriva-owned CrossCountry Trains, which runs hourly between Oxford and the airport (and every half hour to central Birmingham) while National Express continues to run four coach journeys a day between the same points.

The Unite union called two 24hr strikes at Oxford Bus Company on 2 and 6 March in a dispute over an annual pay award for the year starting 1 November last and the company’s refusal to pay all staff extra for working on 27 December and 2 January.

The company says that drivers working on Christmas Day were paid double the enhanced Saturday rate with a day off in lieu, equating to a payment of £48 per hour worked. Those working on Boxing Day and New Year’s Day were paid one-and-a-half times their weekend rate, with a minimum payment of £200. They were also given a day off in lieu which it says could either be taken at a later date or paid up, an equivalent of £40 per hour worked.

‘We believe these payments were more than reasonable,’ it says. ‘We have made Unite a number of different additional offers to settle the dispute, including an additional payment of £95 to each driver. Unfortunately the union has not accepted any of these offers.’

Unite regional officer Marie Hall says: ‘This dispute is entirely of the company’s own making, as it has totally failed to engage in meaningful negotiations. Instead it has adopted an aggressive stance to the workforce in what is a legitimate industrial dispute.

‘The blame lies with managing director Phil Southall who, behind the warm words, has a plan to salami slice our members’ pay and employment conditions. We suspect the hidden agenda here is to break the union. ‘As the Oxford public knows only too well, the city is one of the most expensive places in the UK to live and bring up families. Unite is not prepared to stand by and see our members’ standard of living seriously eroded by this highly profitable company.’

The company operated a full service on its Airline routes to Heathrow and Gatwick on the strike days, using coaches and drivers from a variety of other operators, and with the assistance of around 30 drivers from other Go- Ahead companies was also able to run two of its three Brookes Bus routes and a limited city service on some routes.

Both sides have said they are available for further negotiations to resolve the dispute.