One of England’s few state-owned fleets not painted in a uniform red or green, this small East Midlands operation maintained a distinctive appearance and operating practices for over 20 years and lives on today as a division of the group that owns Trent Barton 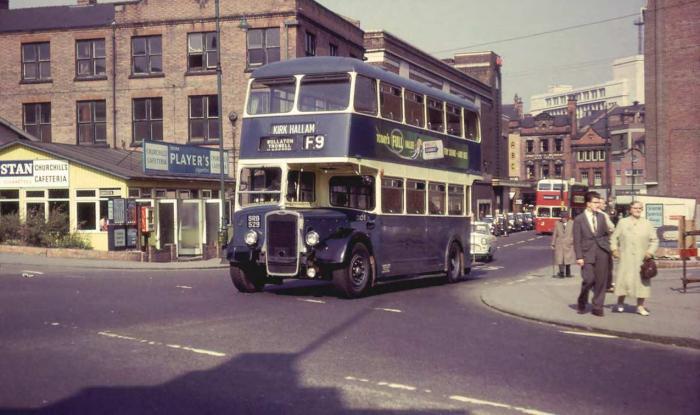 ABOVE: Notts & Derby 301 (SRB 529) was one of 15 Bristol KSW6Gs with highbridge ECW bodywork new in 1953. A Trent lowbridge Leyland Atlantean is following it in this city centre scene in September 1963. Cigarettes were readily available then, with advertisements for Capstan, Bristol, Player’s and Senior Service on either side of the street, while pavement vending machines allowed their purchase when Churchill’s Cafeteria was closed.
IAIN MACGREGOR

Notts & Derby, part of the Wellglade group that owns Trent Barton, is the direct descendant of one of the more unusual operators from the 40-year era of state ownership.

It was originally part of the Balfour Beatty group, formed as the Nottinghamshire & Derbyshire Tramways Company in 1903.

It began operating trams ten years later between Ripley and Nottingham and in 1916 took over Ilkeston Corporation’s route between Cotmanhay and Hallam Fields, south of Ilkeston. Trolleybuses replaced the trams in 1932/33 and the business was renamed Nottinghamshire & Derbyshire Traction Company.