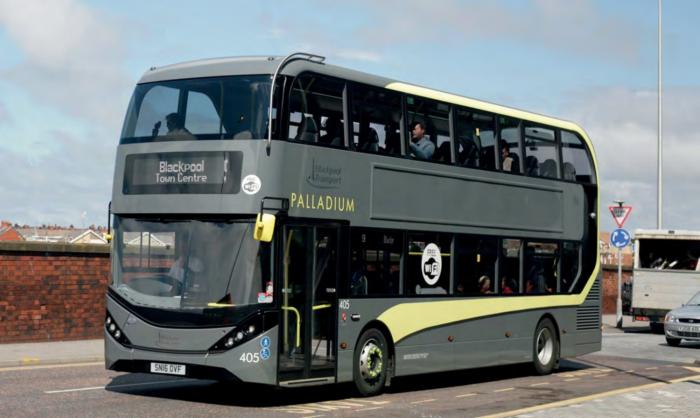 Blackpool Transport, whose profitability was highlighted in the Commons debate, is the first operator outside London to invest in the Alexander Dennis Enviro400 City. Ten delivered last year include 405 (SN16 OVF). Delivery has begun of a second order for 25. All 35 have Euro6 pure diesel drivelines. MARK LYONS

Opening the debate on 1 March on the second reading of the Bus Services Bill, which includes provision for route franchising and stronger operator/local authority partnerships in England beyond London, Grayling led the government’s argument to overturn House of Lords amendments that could give all councils — not just those with directly elected mayors — powers to franchise their networks without government approval and also permit all councils to establish arms length bus companies.

While Grayling accepted that Blackpool is one of ‘a small number of places’ where municipal bus companies survive and play an important part in the local transport system, he said a greater number of them could cause harm.

‘The government does not believe that extending the provision of bus services to council after council is the right approach. It will stifle the private sector investment that has made such a significant difference.’

He said that giving all local authorities automatic access to franchising powers would reduce certainty in the bus market and reduce investment and attractiveness of the services being offered. ‘It would not be good news for bus passengers and certainly not for bus manufacturers and the people who work in those factories across the UK, from Ballymena to Stirling [sic] and Yorkshire.

‘We shall also seek to reinstate the ban on local authorities setting up new municipal bus companies. My view is that local authorities have other priorities today, and this is about partnership between the private sector and the public sector.

‘That is the big difference between the government and the opposition. They do not want the private sector investment that comes in and delivers better and newer buses, providing jobs in Ballymena. They want to go back to the days of the past, but we are not going there as well.

‘We are not going back to the 1970s world of local authority planned and delivered bus services. That was not a golden era, but one of indifferent services that cost the taxpayer. As far as is possible, we want the commissioning and provision of bus services to be kept separate, and to ensure that we retain the strengths of the private sector.’

He told Nottingham South Labour MP Lilian Greenwood: ‘We do not want to go back to the situation where every Labour council is trying to set up its own bus company. We think that will absorb public sector capital that could be more wisely used elsewhere, take up essential time that should be devoted to other services and not deliver a good deal for passengers.’

Arguing for the Lords amendments to remain, shadow transport secretary Andy McDonald described the Bill as ‘an acknowledgment that the deregulation of bus services has not worked’.

‘People on our outlying estates do not even have access to bus services, because those services are run on narrow channels.

Operators exploit those narrow routes for the singular purpose of maximising commercial profit, and they do not give a hang about the socially important things such as ensuring that people are connected in their communities.’

On municipal bus companies, McDonald added: ‘Removing the incentive to profit from operations can allow a greater focus on the social and economic purpose of bus services, meaning that buses can better cater for the social or business needs of a particular geography. Labour did not introduce a clause mandating municipal operators, but simply removed a clause prohibiting them, because we believe that there is not a one-size-fits-all model for running bus services.’

Conservative MP Theresa Villiers, a former government minister and one-time opposition transport spokesman, expressed her worries about the possible impact of franchising and municipal ownership on commercial operators. ‘In competing for bus contracts, local operators might be up against large transport groups owned by overseas governments with deep pockets.

‘I am particularly concerned that the amendment…will mean that bus operators could even find themselves having to contest for contracts alongside a company owned by the franchising authority that is making the decision to award the contract, giving rise to an obvious and unacceptable conflict of interest. I fear that…would inevitably result in a number of bus companies going out of business, which would be bad for passengers.

‘I am also concerned that local authorities that are keen to take over the provision of bus services will find that taking on revenue risk could be a very costly exercise that would deplete the funding available to support those crucial non-commercial routes that do not generate enough passengers to cover their costs.’