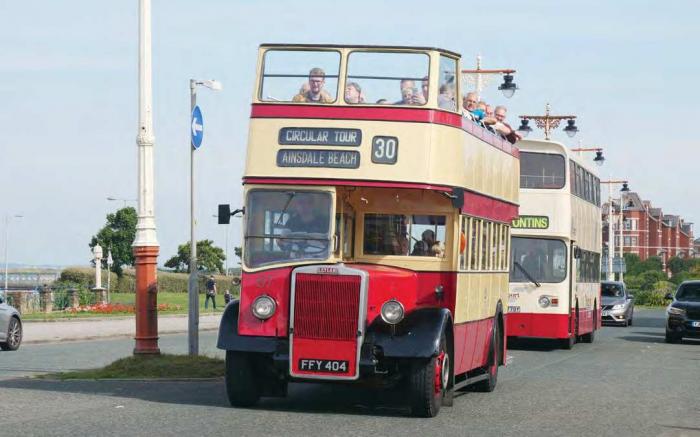 The Merseyside Transport Trust moved its annual running day on September 4 from its usual haunts in Liverpool to seaside Southport, bringing some touches of bright red to the town’s streets.

A lack of suitable city centre locations prompted the change, which led to the move northwards to the town whose red and cream municipal buses — and those of St Helens — were absorbed into an enlarged Merseyside PTE in April 1974 when the Merseyside Metropolitan County was created as part of the radical restructure of local government in England and Wales.

Providing a reminder of Southport Corporation was open-top all-Leyland Titan PD2/3 87 (FFY 404), one of 12 new in 1947 of which six were rebuilt with detachable tops in 1962/63. It is part of the North West Museum of Road Transport’s collection and remarkably is just one of four of the six still in existence. One of them (no.88) went to a museum in the United States in the 1960s, while no.85 is in the Transport Museum Wythall collection in the West Midlands and — as reported in this month’s Millar’s Tales on p20 — no.86 has become an outdoor seating facility at a bar in Bristol.