METROBUS IN THE MAKING

It has taken little over four years to begin providing greater Bristol with bus infrastructure that can deliver some of the benefits of the expensive rail-based rapid transit projects mooted in the past that stalled at the planning stage. DAVID JENKINS explains what is being built and how it should look

Part of the guideway for the Metrobus m2 route from Long Ashton, at the site of the future Ashton Gate stop. The Wright Eclipse Gemini-bodied Volvo B9TL passing overhead on the A3029 Brunel Way is on the park-&-ride service that the m2 will replace. 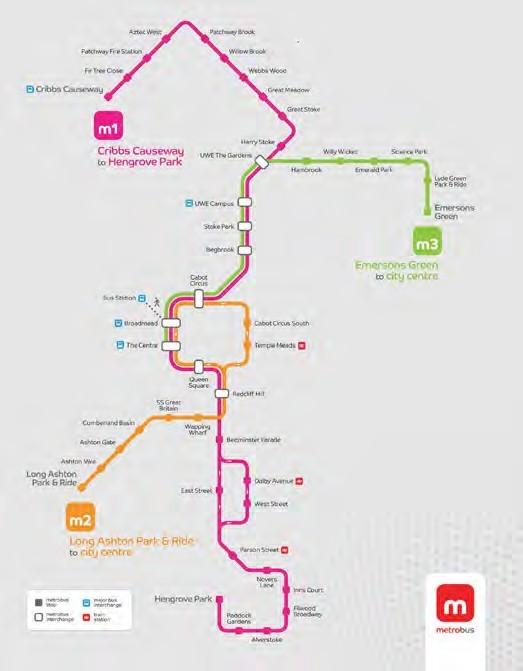 The three Metrobus routes currently being constructed. Only the m1 is cross-city. The traffic in greater Bristol is widely acknowledged to be a problem, and has been for years. As a prosperous area with high levels of car ownership, rapid transit has been proposed several times over the past 30 years.

Advanced Transport for Avon — a 1980s private sector scheme — even managed to obtain parliamentary powers to build part of a light rail network. Its financial collapse saw the mantle picked up by the public sector as Westway, which planned a six-line network.