Abellio West London will operate route 111 (Heathrow – Kingston) from next April. Buses will be based at Twickenham depot. The route has been operated from Hounslow garage since it was first introduced in 1944 although at various times the now closed Mortlake, Riverside and the ‘original’ Twickenham garages have had partial allocations.

Originally taking an indirect route linking Hounslow and Hammersmith via Richmond, it had largely taken on its current form by 1981 when it was extended to Heathrow Airport.

Tower Transit will continue to operate route 13 (North Finchley – Victoria), using the existing MCV EvoSeti-bodied Volvo B5LHs, when a new contract begins next April. There will, however, be a significant reduction in peak vehicle requirement, from 31 to 22, which equates to a cut from the current ten buses per hour to around seven.

Metroline retains route 204 (Edgware – Sudbury Town) and will replace the current Alexander Dennis Enviro400s, largely dating from 2011, with new battery-electric double deck buses. The route currently operates from Alperton garage, which is due to close on September 10. The following day an open day, with special bus services, will take place. 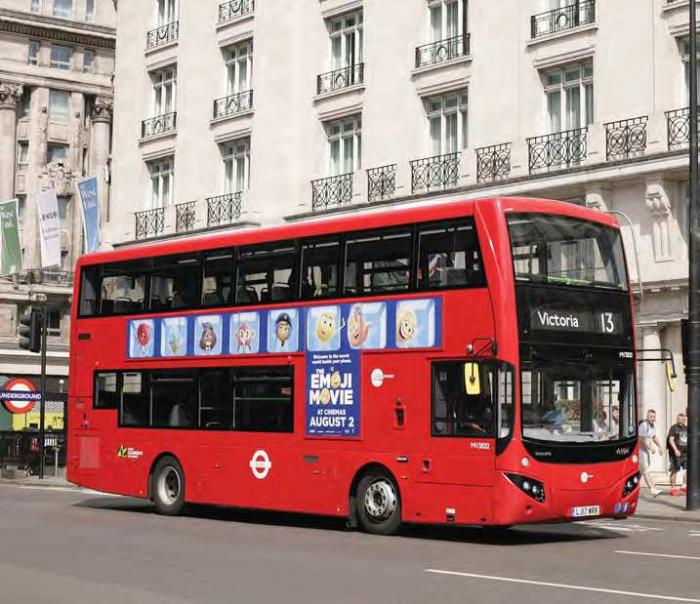 The contract for routes 253/N253 (Euston/Tottenham Court Road – Hackney/Aldgate has been extended from June 4, 2022 until May 31, 2024 to allow for it to be retendered at the same time as route 254 (Holloway – Aldgate). Both routes are currently operated by Arriva London North using New Routemasters. The 254 was introduced in May 2003 and replaced the Aldgate to Holloway leg of Route 253.

Reviews have also been announced into the future requirements of route 168 (Hampstead Heath – Old Kent Road) and schoolday service 638 (Coney Hall – Kemnal College) in advance of their retendering. The current contracts for both routes expire in September 2022.

● The proposed extension of route 324 (Brent Cross – Stanmore) to Centennial Business Park (Look in on London - January) is expected to go ahead from August 28.

The true extent of the reduction is masked by the inclusion of around 200 vehicles retained to meet the requirement for additional vehicles for extra schools’ transport introduced last autumn to address social distancing concerns. Many of these were subsequently withdrawn before the end of the school year in July and it has yet to be confirmed how many will return when schools re-open in September.

London General WVL204 in Mitcham. This was the oldest bus in TfL service on March 31. Initially delicenced in the first lockdown, it was reinstated in July 2020. Since October last year it has been used exclusively on school route 655 (Mitcham – Raynes Park High School).
KRIS LAKE

The fleet continued to get older with its mean age increasing from 6.1 years to 6.7 years although this was in part due to older vehicles being retained or reinstated for additional schools’ services. Nevertheless, nearly a fifth of the UK capital’s buses were over ten years old compared to less than a tenth a decade earlier.

Just under 43% of the fleet, all doubledeckers, were hybrids with 487 zeroemission buses forming 5.4% of the total.

RATP’s Quality Line operation, along with its Epsom garage – which it acquired along with the Epsom Coaches business in 2012, closed after service on July 2. Operation of routes 413 (Sutton – Morden) and S1 (Lavender Fields – Banstead) passed to Go-Ahead London.

The 413 is being run by London General from Merton garage using existing London General Alexander Dennis Enviro200s while the Optare Metrocitys used by Quality Line on route S1 have transferred, along with operation of the service, to Metrobus’s Croydon base. Routes 293 (Morden – Epsom Hospital), 404 (Cane Hill – Caterham-on-the-Hill), 467 (Epsom – Hook) and 470 (Epsom – Colliers Wood) was reallocated to London United’s Tolworth garage from June 19.

Following the easing of lockdown restrictions on July 19, London United resumed operation of contract services linking the New Square Office Park at Bedfont Lakes with Hatton Cross and Feltham Stations. Initially a single, circular, route is operating during peak hours only. The lunch-time route to Staines has been withdrawn. The Scania Omnicity double-deckers used before the service was suspended in March 2020 do not meet the more stringent Low Emission Zone requirements that came into effect earlier this spring. Their place has been taken by Alexander Dennis Enviro200s which retain red livery, albeit without Transport for London’s ‘Buses’ roundels.

London General OM12, one of 12 Optare Metrocitys that passed from Quality Line to Go-Ahead London’s Metrobus op with the S1.
KRIS LAKE

To mark the 50th anniversary of the launch of Stevenage’s Superbus network the Bus Users Group Stevenage (BUGS) arranged for preserved London Country Leyland Atlantean AN264 and London Transport SM88 (which was actually a red bus but has recently been painted green by its owner) to be displayed in the Town Square on July 31, the actual anniversary date. The Atlantean was allocated to Stevenage by London Country when new. Stevenage Bus was the local MAP name adopted for the town’s services from April 1980 which superseded Super Bus as a brand.
MARK LYONS

Arriva Kent Thameside has formally abandoned plans to introduce Green Line route 720 (Stansted Airport – Liverpool St). The new service had been due to start operating on May 4, 2020 (Look in on London – May 2020) but its introduction was deferred due to the first Covid-19 lockdown.

London General will withdraw route 575 (Harlow – Romford) from August 27. The route provides a single return journey on weekdays and is linked with Essex County Council school service 804 (Debden and Chigwell) operation of which will pass to Stephensons from September. 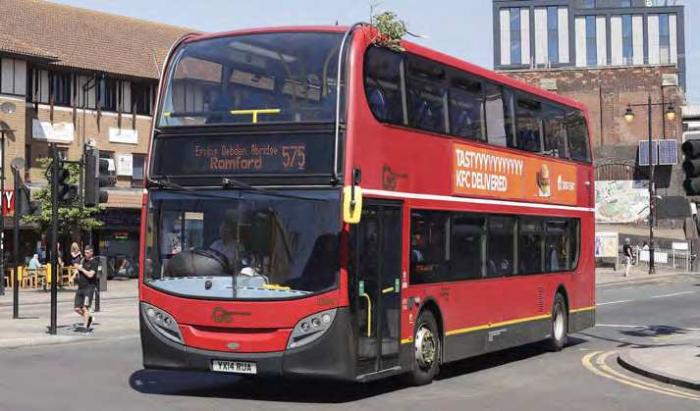 The Department for Transport has agreed to a request from Transport for London (TfL) to remove the requirement for July bus service review. A review of service levels on buses will take place as part of a wider exercise which also look at London Underground and TfL Rail in September. It will include an assessment of demand and identify how passenger behaviour and travel patterns change over the autumn.

London TravelWatch Director, Emma Gibson, commented: “We are really pleased that the Government has listened to London TravelWatch and others and decided to delay the review into the demand for bus services in London which had been scheduled for later this month.

“Had it gone ahead, there was a real danger that the review would have underestimated bus demand, because most people are unlikely to return to their offices before the autumn. This could have resulted in premature reductions to the frequency of buses which would have made the bus less attractive to use, with crowding and a subsequent loss of fares revenue.

“Any new dates to review bus services should be delayed until enough people have returned to the office to give a full and accurate picture of the city’s post-pandemic requirements.”

Speaking to the London Assembly Transport Committee on June 20, Heidi Alexander, the Deputy Mayor for Transport, was pressed to commit to hold consultations on frequency reductions to bus routes. She said she was unable to do so given the financial pressures that TfL was under. Cuts to central London routes are expected to start being implemented from the end of August to deliver an overall reduction in peak vehicle requirements of around 300 buses.

Transport for London has published its review into the trial operation of Demand Responsive Travel in Sutton and Ealing. The trials, which were launched in May and November 2019 respectively, were suspended in March 2020 as a result of the Covid-19 pandemic and formally terminated in May 2020. 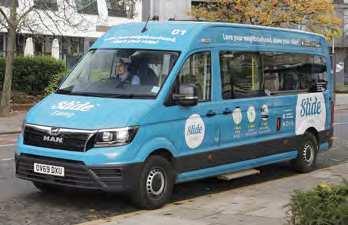 The number of journeys that connected with public transport was low, only accounting for 10% of Sutton trips. However, there was no Oyster card or travelcard integration, which would have encouraged this.

The review concluded that DRT is not cheaper per ride than existing bus services particularly as Freedom Pass holders used the service up to twice as frequently and were more likely to take a ride after they created an account.

The online booking app was popular with users, accounting for more than 80% of requests. Feedback from the trial is being used to help improve the efficiency and cost effectiveness of the Dial-a-Ride service.

■ THE MAYOR OF LONDON, Sadiq Khan, has asked Transport for London to mandate the wearing of face coverings on its services as a condition of travel after July 19 when the existing English legal requirement was lifted.

■ MID-LIFE refurbishment of the 1,000 strong New Routemaster fleet is due to commence shortly. The programme is expected to take up to five years to complete.