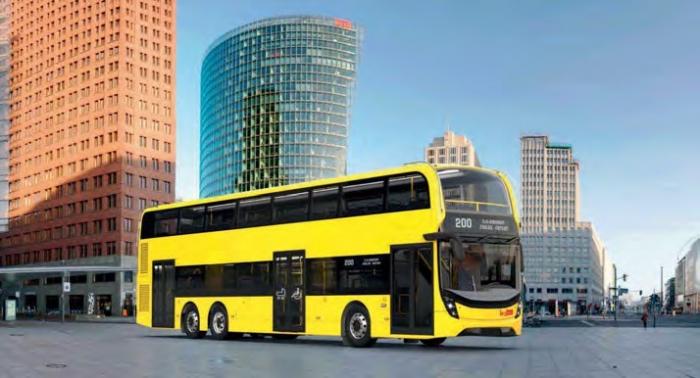 A digital impression of a BVG Enviro500.

Alexander Dennis has secured a landmark deal to supply up to 430 three-axle Enviro500 doubledeckers to Berlin municipal undertaking BVG, its biggest order yet from continental Europe.

The German capital will receive two of the 13.8m 80-seaters with three doors and two staircases for six months of trials starting in the second quarter of 2020, and has agreed to take a minimum of 70. BVG’s current plans envisage a fleet of 200 in the near term, with authority to purchase up to 430 from the framework contract. The order is worth up to €220million (£193million).

That would allow it to replace its entire fleet of similarly configured MAN Lion’s City A39s, some of which are 13 years old. These suffer from heavy fuel consumption and corrosion problems. They are powered by Euro4 and Euro5 engines and some have been retrofitted with exhaust gas treatment.

Full technical details of the Enviro500s have still to be revealed. The initial intake will be powered by Euro6 diesel engines, but the flexible contract will allow it to purchase electric drivelines in the future. ‘It is part of our plan to electrify our bus fleet by 2030,’ says BVG chairwoman Sigrid Nikutta.

Out of its fleet of 1,500 buses, BVG currently has only a handful of zero-emission Solaris single-deckers in service, with a total of 30 Mercedes-Benz eCitaro and Solaris Urbino models on order.

The 4.06m (13ft 4in) high Enviro500s are the first fixed-roof, British-built double-deck service buses for any German municipal operator. Alexander Dennis loaned a two-door United States specification example to BVG in 2015 and set up an office there with European development manager Martin Gruber. Prototype two-axle Scania Citywide and VDL Citea double-deckers have been on longer-term trial and both remain in service.

BVG’s tendering procedure was lengthy and the decision to buy British has raised eyebrows in some industry circles. However, Nikutta is unconcerned by the UK’s impending departure from the European Union, telling Buses: ‘These new buses are good and the prospect of Brexit does not put us off at all.’ BVG is particularly attracted by the 16.5tonne unladen weight and by the UK manufacturer’s success in selling over 17,000 Enviro400 and Enviro500 double-deckers around the world.

The Berlin order follows Swiss orders for 12.9m Enviro500s —19 for Post Auto and 13 for the city of Lausanne. Like those 32 vehicles, initial deliveries for Berlin will be built in the UK, but Alexander Dennis may establish an assembly facility in central Europe at a later stage. It already has factories in Canada, China, Malaysia and the United States.