Ten of Kent’s 15 mainly Tory MPs have signed a letter to the Conservativecontrolled county council, urging it to ‘reconsider plans to cut subsidies to 78 bus services across the county’.

They sent the letter a day after the council agreed a consultation to accelerate the plan to reduce spending on bus services. It now has a target to save £4million by September, double that previously proposed (Buses December), which would leave around 30 subsidised routes still running.

The council published a list showing the 78 routes at risk by financial performance, detailing the number of passengers and the subsidy per passenger journey for each route. Top of the list is Fridays-only shoppers services 292/299 between Tonbridge, Hawkhurst and Tenterden, at £18.09 per passenger.

However, more than half of the routes are in the county’s ‘priority one’ category, where subsidy is below £3 per passenger journey. This includes all-day routes as well as evening and Sunday services.

The consultation is also intended to seek views on the criteria for subsidising bus services, as well as the impact on individual routes. 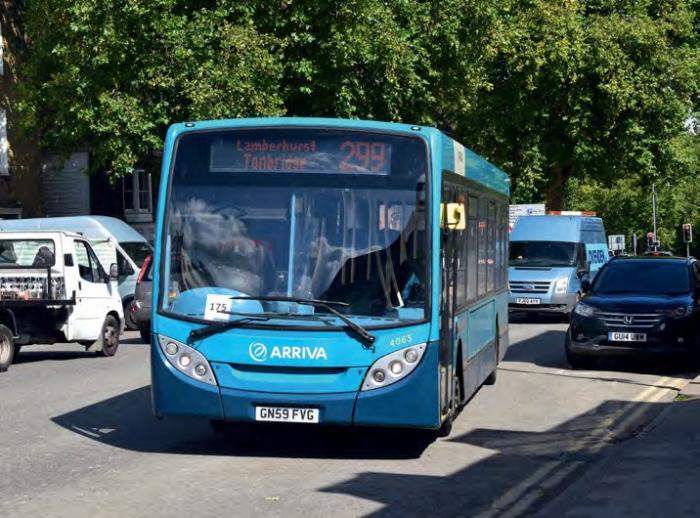 Big blue taxi? Arriva Kent & Surrey Enviro200 4065 (GN59 FVG) arrives in Tenterden to take up the return working of Friday shoppers route 299. On this day in September, the journey only attracted two passengers, one of whom was the photographer.
DAVID JENKINS