IRELAND IN THE SIXTIES

The steady electrification of Ireland’s bus fleets contrasts with the scene over half a century ago, when some of the newest double-deckers in Dublin had recycled chassis units and privatisation of a few routes in Northern Ireland had brought secondhand single-deckers into the province at the end of their first lives in major English fleets 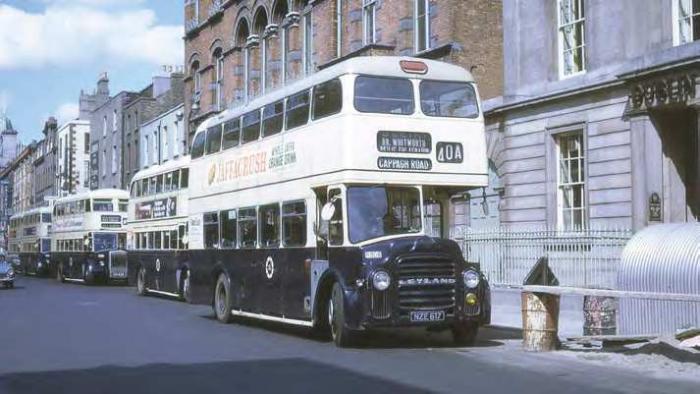 The round-edged windows and glassfibre components of R908 (NZE 617) contrast with the prewar origins of the bodies on the OPD2s behind.
IAIN MACGREGOR

Bob Hind’s travels through Ireland have inspired us to revisit photographs that Iain MacGregor took in July 1968 in parts of the six and 26 counties either side of the border.

State-owned Coras Iompair Éireann (CIÉ) was introducing rear-engined Leyland Atlanteans on Dublin city services, where they were heavily outnumbered by front-engined Titans with open rear platforms. The newest of these, 26 PD3s delivered in 1964/65 — the R900s — were less modern than their appearance suggested.

Their five-bay Park Royal bodies, assembled by Commercial Road Vehicles at Dundalk, contrasted with CIÉ’s own bodywork on earlier Titans, which stretched a prewar Leyland product for 25ft long, 7ft 6in wide Titans to fit chassis 6in wider and up to 5ft longer, with six bays on 27ft 6in long OPD2s and seven on 30ft PD3s; four OPD2s are parked behind R908 in the city centre.