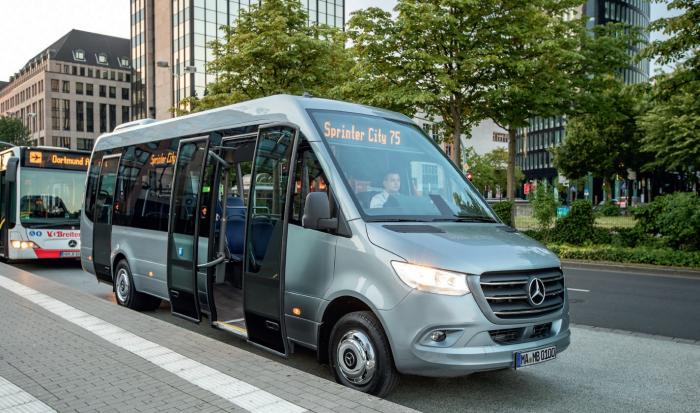 The Sprinter City 75 will hold 38 seated and standing passengers.
DAIMLER

Mercedes-Benz parent Daimler is launching a new version of the minibus based on the rear-wheel-drive Sprinter van, including a 38-passenger urban service bus.

The new range has more flowing body lines and a panoramic front windscreen rising up high to the destination screen.

First to be introduced this year are the Sprinter Transfer 23 and 35, the Sprinter Mobility 23 for passengers with access difficulties, and the high-capacity Sprinter City 75. Other models, including right-hand-drive versions, will follow next year.

Daimler says the 8.5m Sprinter City 75 forms the bridge between minibuses and the Citaro. It has a distinct bus rear end and tail lamps, which differ from those on the van.

Able to carry up to 38 seated and standing passengers, this has five folding seats on the driver’s side and two more on the door side in a space, which can be used alternatively for a wheelchair or pram. Entry is through a two-leaf plug door directly behind the front axle.

The minibuses are fully networked and can be integrated into Daimler’s Omniplus On fleet management system.