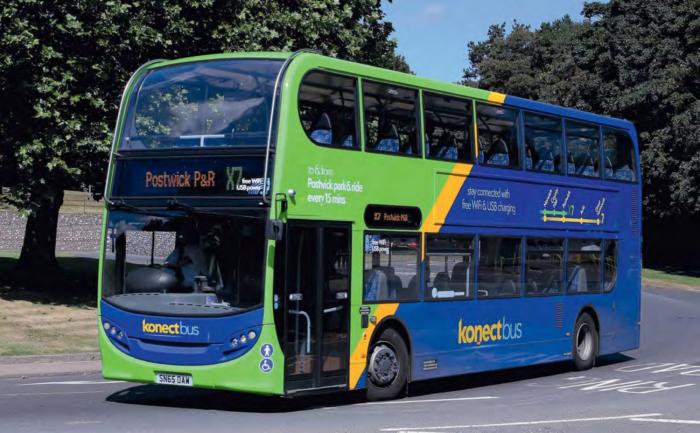 Go-Ahead Group’s Norfolk and Suffolk operations are shrinking further, as the group struggles to address financial performance of these former independent operations. Several changes are to be introduced during March and April.

It is withdrawing the long-standing direct service 7 between Great Yarmouth and Norwich, conceding the corridor to First’s more frequent X1/X11 service. Currently run by Konectbus, it was amalgamated with the Postwick park-&-ride service in Norwich last year, and this element will continue, with Konectbus redeploying its resources to provide seven buses per hour along the Yarmouth Road.

However, other routes in the Norwich area will be reduced in frequency, while Anglian Bus’s presence in Great Yarmouth will be reduced to one bus an hour from Lowestoft. Go-Ahead has already conceded several corridors to First, including Swaffham- King’s Lynn (otherwise served by the X1 route between Peterborough and Norwich) and Kessingland-Southwold, to which First Eastern Counties returned last summer.

The Anglian Bus fleet, numbering 71 vehicles when Go-Ahead took over in 2012, subsequently grew to around 100, but will shrink to fewer than 20 in this latest reiteration. The Konectbus fleet of 44 when acquired in 2010 now consists of around 60.

Several routes to the north and east of Norwich have switched progressively from Anglian Bus to Konectbus and it is understood that the latest changes will include redundancies at the Suffolk operation.