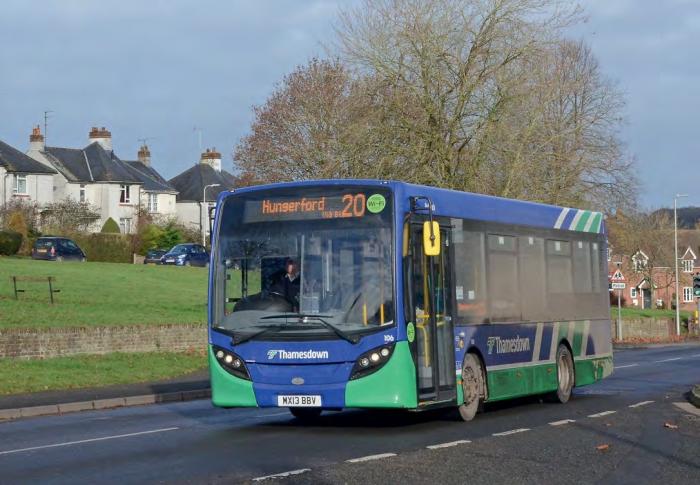 Thamesdown operates beyond Swindon as well as within the town. Photographed in Hungerford on route 20 from Marlborough is 106 (MX13 BBV), an Alexander Dennis Enviro200 acquired in 2014 and new the previous year to Hatts of Chippenham. MARK BAILEY 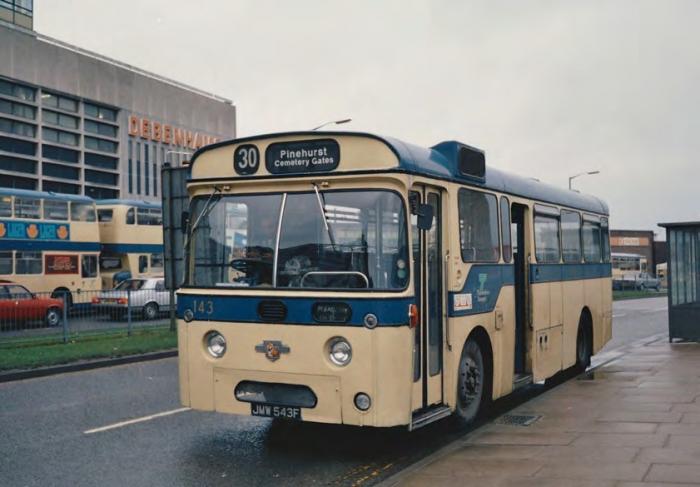 Judged UK Bus Operator of the Year in 2011, the 85-vehicle Thames down company lost nearly £1.5million over the past four years and was expected to lose a further £149,000 in the current financial year. In 2015, the council bought its 150-vehicle depot, opened in 2005 on a new site at Barn field Road, for £2million.

Go-Ahead has agreed to pay up to £7.2million for the company, allowing the council to meet financial obligations and pensions requirements, and a further £4million for the depot. The council has sought assurances that Go-Ahead will not sell the depot within the next five years.

Discussions leading up to the sale, agreed at a council cabinet meeting on 1 February, were conducted in secret as councillors wanted to avoid predatory registrations being made by other operators if news of Thames down’s difficulties became public.

Fifteen double-deckers, used primarily as school buses, include nine East Lancs-bodied Scania Omni Dekkas new to London United in 2005 and acquired by Thames down in 2013. It also has a 50-year-old Northern Counties-bodied Daimler CVG6 retained as a heritage vehicle.

Go-Ahead is incorporating Thames down into its Go South Coast business. Its Salisbury Reds division — part of what used to be Wilts & Dorset — already serves Swindon with hourly Monday to Saturday service X5 from Salisbury, and Salisbury Reds operations manager Alex Chutter has become general manager at Thames down, succeeding managing director Paul Jenkins, who joined the company from First Somerset & Avon in 2006 on the retirement of long-serving MD John Owen.

‘This is an excellent opportunity for us to develop the services on offer to local people here in Swindon and north Wiltshire, ’ says Go South Coast MD Andrew Wickham.

‘We’re keen to point out that it’s business as usual as far as our customers are concerned. Any tickets or passes they have will still be valid and our 85 buses will continue to serve existing routes with no change to timings.

‘That said, our ultimate aim is to enhance the services on offer here. As part of this, we will be consulting with local people and listening to the needs of those who travel on our buses. Our team will be engaging with representatives of local bus users about our plans to invest in local services.

‘We are excited to be providing vital sustainable transport in this region, and I have no doubt our talented team will make a complete success of our new venture. I look forward to meeting with our local customers and hearing their views over the coming weeks and months.’

Cllr David Renard, leader of the Conservative-controlled council, says the deal on offer from Go-Ahead offers the best value and is in the best interests of the company’s passengers and employees.

‘We have had to change the way we provide services across the council while balancing the ever increasing demand on adults’ and children’s services.’

Swindon Borough was created in 1997 as a unitary authority administratively independent of Wiltshire, succeeding the Thames down District Council that had existed since 1974. Like Thames down, Swindon was a Labour-controlled council from elections in 1996 until 2000 when no party had overall control. The Conservatives won control from 2003 and currently have a three-seat majority.

Ironically, this year marks the 90th anniversary of the start of municipal bus services in the town. Swindon Corporation introduced electric trams in 1904, its first motorbuses in 1927 and withdrew its last trams two years later. The undertaking became Thames down Transport when local government was reorganised in 1974. It has been an arms length company, wholly owned by the council, since 1986. The trams were painted maroon, but the buses have always been blue, applied in different shades and with varying proportions of cream or white.

The Thames down takeover is the first privatisation of an arms length municipal company since Go-Ahead bought Plymouth Citybus, for £20million, in December 2009. Three of those left in council ownership — Nottingham City Transport, Reading Buses and Edinburgh-based Lothian Buses — figure regularly as winners in the UK Bus Awards, with NCT the current Operator of the Year and Reading Buses runner up.