A selection of some of the books, models, DVDs, calendars and other presents for people with a passion for the world of buses and coaches 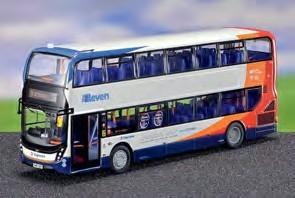 The fifth release of Northcord Model Company’s 1:76-scale casting of the 10.9m single-door Alexander Dennis Enviro400 MMC — ukbus 6511 — is in the livery of Stagecoach West Scotland with full route branding for route 11. It shows 10930 (SN67 XAY), one of 27 introduced by Stagecoach West Scotland on former A1 Service route 11 (Ardrossan- Kilmarnock) in January 2018. Detailing of the model includes representation of its eLeather seats, free Wi-Fi and USB sockets, as well as the opposite-facing seats at the rear of the upper deck saloon. Interior detail represents the real full-size vehicle, with extensive portrayal of handrails on both decks, as well as some of the small notices on doors and windows. This release is a limited edition of 1,008.