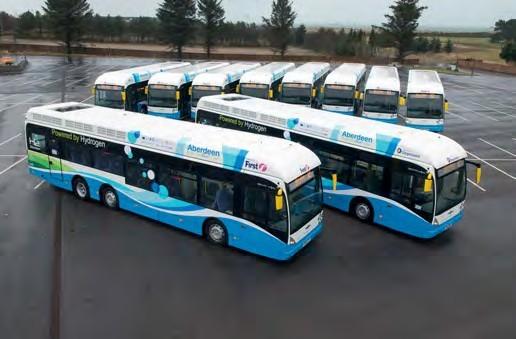 Aberdeen intends to double its fuel-cell fleet, currently made up of 10 Van Hool A330s operated by First and Stagecoach.

The €125million (£ 108 million) project combines two programmes. One called Jive will put 144 fuel-cell buses into service in five European countries. The other, called Mehrlin will create seven large hydrogen refuelling stations across Europe. The Jive project is supported by a €32million (£27.6million) grant from the public-private Fuel Cells & Hydrogen Joint Undertaking partnership, Mehrlin by €5.5million (£4.7million) from the European Commission.

London and Birmingham have already secured £3.8million of the UK government’s Office for Low Emission Vehicles (OLEV) funding towards the purchase of 42 buses as part of the programme. Aberdeen aims to double its fleet of fuel-cell buses from 10 to 20.

In the German city of Cologne, where the project was launched in January, regional transport authority RVK plans to add 30 hydrogen fuel-cell buses to the four already operated in the nearby towns of Hürth and Brühl.

Other buses will be operated in Wuppertal and Rhein-Main in Germany, Latvian capital city Riga and Slagelse in Denmark. The fuelling stations will be in London, Birmingham and locations in Germany, Italy and the Netherlands, the Dutch one being intended to develop additional uptake of fuel-cell vehicles.

‘These projects represent a step change for the hydrogen bus sector, moving from a technology demonstration stage to a day to day offering for zero emission public transport, ’ says Element Energy, the UK company coordinating the two projects.

These hydrogen fuel cell buses will offer the same operational flexibility compared to the incumbent diesel buses, without any harmful exhaust fumes. As such, they represent a solution to the twin problems of air pollution and greenhouse gas emissions from public transport in our cities.

‘The scale of deployment envisaged here will allow European bus manufacturers to develop their production capabilities and achieve the economies of scale which are needed to allow fuel-cell buses to compete with other zero emission modes of public transport.’