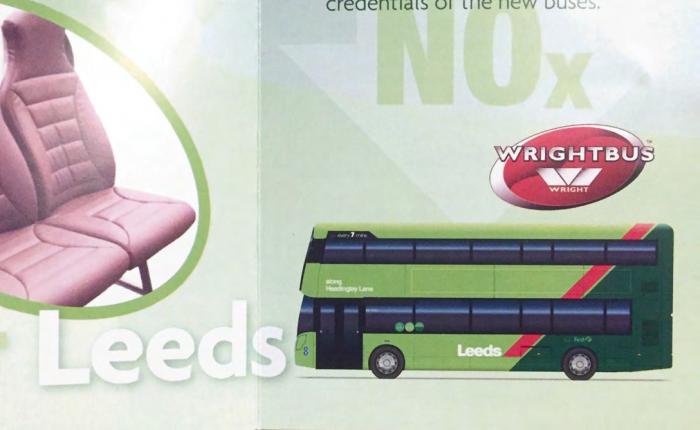 First’s publicity shows that the Wright StreetDecks for Leeds will wear a new twotone green and red livery.
DANIEL STAZICKER

First Bus says it will only invest in new vehicles in areas where local transport strategies recognise the importance of buses. It has also signalled a further round of service cuts.

Announcing trading figures for the half year to 30 September — £15.8million operating profit on £428.2million revenue, a margin of 3.7% — it says commercial passenger volumes fell by 0.3% on a year earlier, with declining high street retail footfall and traffic congestion affecting demand, especially in Scotland and the north of England.

It says that economies — including the closure of depots in Rotherham and Bury — helped increase the operating margin from 3.2% in the first half of 2016/17 and that it anticipates further financial improvements as it implements additional savings and focuses its investment on areas offering the best prospects of attracting more passengers and increasing financial returns.

FirstGroup chief executive Tim O’Toole has confirmed that it will only purchase around 180 new buses in the financial year to 31 March, compared with 272 in 2016/17. ‘We are investing in First Bus at lower levels than the prior year, as we begin to focus our capital budget only on those markets where the local transport strategy recognises the importance of bus services in responding to the problems of congestion, air quality, parking and issues of social exclusion.

‘We are focusing our investments on those local markets where our stakeholders recognise the value of bus services, allowing us to capture the best opportunities for growing patronage and generate acceptable returns’, he says.

‘We’re moving forward by confining our future investment to those that can generate the necessary returns, and that requires local authorities to help to provide the environment in which a reliable bus service can be delivered.

‘In places like Leeds, we see officials who have announced investments intended to enable the doubling of bus patronage over the coming years; quite a change from the current situation. We see similar ambitions in west of England and with other authorities to address congestion and other barriers to a good bus service; the things that have produced the challenges seen across the industry.

‘That willingness is particularly crucial to us in restoring margins, and we shall tailor investment accordingly.’

O’Toole says all the bus companies are profitable, but the new focus on supportive areas is mainly a consequence of traffic congestion.

‘As congestion has grown, you’ve had to keep injecting more capital in order to keep up your timetable. And it’s just more and more capital, and we’ve got to stop this. FirstGroup has put so much capital in its First Bus business, it can’t continue down this route unless we have partners who are going to work with us to make sure they can deliver a return for our shareholders and, by the way, reliable bus service for our customers.’

Briefing financial analysts about the results, chief finance officer Matthew Gregory says that, having met all the deadlines to replace vehicles that did not comply with Disability Discrimination Act accessibility standards, First can afford to be more selective in where it places new buses.

‘What we are saying is we have much, much more choice in where we invest in the business. We haven’t seen the revenue growth that we thought we might do and we’re having to adapt our plans.

‘So the conversations [within the business] are very much driven around, you know, that there is no unlimited supply of capital. We have to supply a return on that capital. That division has to generate cash and the management is well aware that it’s got to make choices.

‘So if there are places where the environment is conducive to our business, then great. And if it’s not, then we may have to make more difficult choices.’

First had yet to announce details of its 2017/18 new vehicle orders as we went to press on 10 December, but local reports say that 34 Wright StreetDeck Euro6 double-deckers are being purchased for routes 1 and 6 in Leeds as a first stage of a planned purchase of 284 vehicles for the city.

It has secured £131,250 Scottish government Green Bus Fund support towards the cost of 25 low carbon certified Alexander Dennis Enviro400 MMC Euro6 double-deckers for Glasgow, £4.79million from the Department for Transport towards a £28million investment in 110 biogas buses for Bristol by 2019 and £3.3million also from the DfT towards the cost of 27 electric double- and single-deckers for York park- &-ride. It is not clear how many of the gas and electric vehicles would be delivered in the current financial year.