Norman Baker, the former Liberal Democrat MP who was bus minister for England from 2010 to 2013, has surprised the industry by becoming managing director of Brighton independent bus and coach operator The Big Lemon.

His move has left Bus Users UK looking for a new chair, the post he had held since succeeding another former bus minister, Labour’s Gillian Merron, in October 2015. The Big Lemon was founded 10 years ago as a community interest company, reinvesting some of its profits in the areas it serves and fuelling its fleet with waste cooking oil collected from local restaurants. It raised £25,000 from crowdfunding to launch its first two electric buses at the end of April, powered by energy from solar panels on its garage roof. 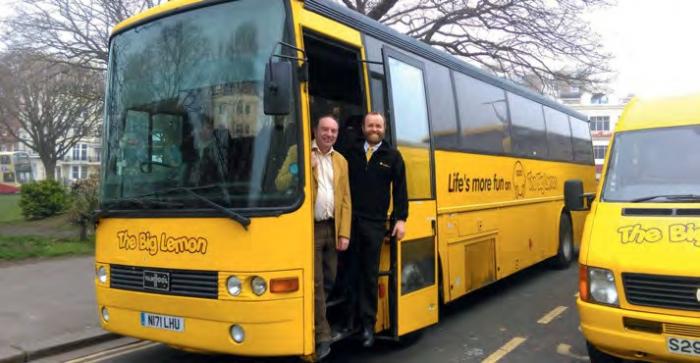 Chief executive Tom Druitt, a Green Party councillor in Brighton & Hove, says the company’s goal now is that by 2030 every community in the UK will have access to affordable, sustainable transport using zeroemission vehicles powered by renewable energy and owned by the local community.

‘This organisation aims to develop a network of social enterprises across the UK to make this happen. The Big Lemon in Brighton & Hove is the first, and the aim of Norman’s appointment is to facilitate the development of best practice to provide a platform for The Big Lemon to offer its pioneering sustainable transport model in other areas across the country.’

Druitt says there is strong interest in the idea in Bristol, Totnes, Southampton and Hertfordshire. The company is bidding for funding from the government’s Innovate UK programme to explore how such public transport could be developed over the next 13 years.

Baker, who responded to an advertisement for the MD’s role, says he intends to take a hands-on approach to running the company. ‘I feel particularly at home with its strong environmental approach, showing you can run a successful business in an ethical manner.’