The last jointly operated interurban route in Greater Manchester comes to an end on 23 July when First and Stagecoach provide separate replacements.

Service 22 (Bolton-Stockport) was introduced at deregulation in October 1986. It was part of a new commercial network, designed by Greater Manchester PTE service planners before responsibility for such things passed to the commercial bus operators. It joined together several services to form a rather unwieldy but logical and well used service via Farnworth, Swinton, Eccles, Urmston, Stretford, Chorlton and Burnage when traffic congestion was much less of a concern than it is today.

Operated initially by Greater Manchester Buses, it passed to GMB North and GMB South when the company was divided in 1993. Those companies are now owned respectively by First and Stagecoach.

A daytime inter-peak round trip originally took in excess of 4hr 30min. As bus workings (and operator) were determined by the start and end point of bus workings, it was often the case that a succession of buses of one operator was followed by a cluster of the other, rather than being alternated. The three all-day Stagecoach workings followed each other.

The service survived virtually unaltered other than being diverted to serve the Trafford Centre when that opened in 1998. The additional time required for the diversion and associated mid-point layover at this major generator of passenger traffic required an additional vehicle in the cycle. Numerous timetable tweaks were made over the years by both operators to keep pace with traffic congestion and to try to improve punctuality.

Most evening journeys were tendered. Over the years these were provided by several other operators (in addition to First and Stagecoach), some of them long gone such as PMT’s Red Rider operation and Stuart’s of Hyde.

Manchester Community Transport is involved currently. Even the Chorley depot of Stagecoach North West (as it was at the time), a former Ribble facility, worked the two Bolton-ended evening bus workings for a period. 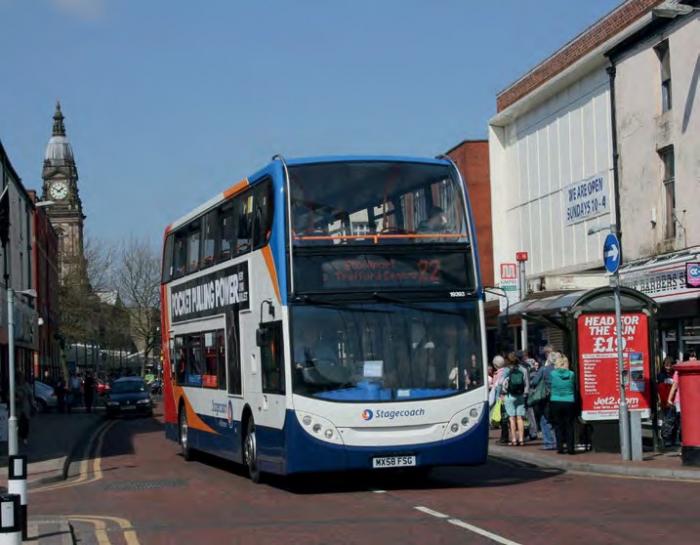 Stagecoach Manchester 19393 (MX58 FSG), an Alexander Dennis Enviro400, leaving Bolton for Stockport on route 22 in April 2009. The buildings to the right have since been demolished to make way for the new Bolton Interchange.
JOHN YOUNG

Traffic congestion across many parts of Greater Manchester has deteriorated in recent years, without any radical action being taken to manage highways and give buses more priorities. Regular problems on the orbital M60 causing displaced traffic, Trafford Centre seasonality, football traffic, special events (such as those at Event City in Trafford Park), closure of the swing bridge at Barton and a myriad of roadworks, diversions and road closures have all played their part in gradually making the 22 unfit for purpose.

Concerns about poor punctuality and reliability coupled with the reduced ability to make necessary day-to-day operational adjustments many miles from home base have resulted in decisions by both operators to withdraw the route.

Service 32 (Wigan-Manchester) is another example where the length of the route and the difficulty in maintaining a customer friendly timetable without excessive intermediate waiting time was a factor in its demise, although it also lost passengers to First’s Vantage-branded Leigh-Salford-Manchester Busway.

Service X34 (Leigh-Manchester) became a jointly operated service for a time following the sale of First’s Wigan operations to Stagecoach in December 2012. Following the opening of the Busway, First withdrew from this corridor and Stagecoach now operates the service every half hour as service 34, having tried a 20min frequency as service X34 before this. 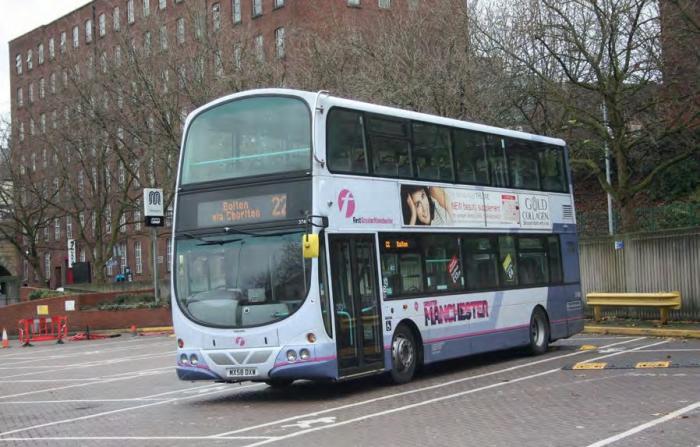 At the opposite end of the route, First Manchester 37409 (MX58 DXW), a Wright Eclipse Gemini-bodied Volvo B9TL, laying over in Stockport in December 2014 before returning to Bolton.
JOHN YOUNG