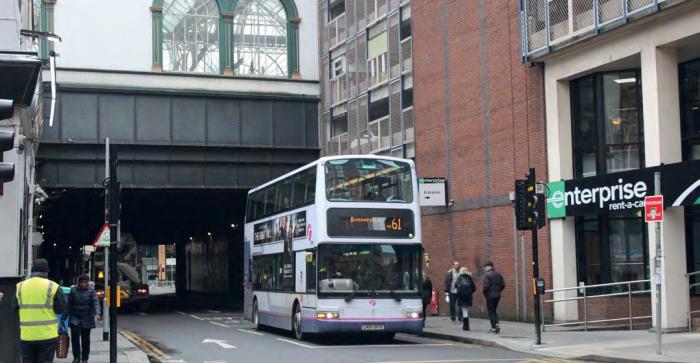 The clean air challenge in Glasgow city centre is to replace or repower large numbers of Euro3-engined buses like First Glasgow 33035 (LK51 UYD), a Plaxton President-bodied Dennis Trident new to First London in 2001.

Upgrading the Glasgow bus fleet to Euro6 diesel is the quickest and most cost effective means of improving air quality on key city centre streets, says the city council.

Speaking at a Scottish Transport Emissions Partnership (Step) conference in Edinburgh in November, Vincent McInally, one of the officers leading Glasgow City Council’s planned introduction of a low emission zone (LEZ) by 2019, insisted that the scheme envisages the one-for-one replacement of existing higher emission buses and not a reduction in services.

He says that the evidence gathered by the council, measuring emissions levels on key routes, has identified where the city’s large numbers of Euro3, Euro4 and Euro5 buses create poor air quality, but also has pinpointed others where reduced bus emissions would at best have only a negligible effect.

It has measured the worst levels of nitrogen oxides (NOx) on three areas in or close to the city centre: Hope Street, Cathedral Street and Great Western Road. It has established that these all come from diesel-engined vehicles, with petrol-engined cars making only a minimal contribution.

McInally says that between 70 and 80% of NOx in Hope Street comes from buses and coaches, and that buses account for an ‘overwhelming’ proportion of NOx emissions in Cathedral Street, but that diesel cars cause 70% of those measured on Great Western Road.

‘There is a clear link between areas of increased bus traffic and higher levels of city centre exceedences [sic]’, he says. ‘When we look at what to tackle first, then bus will bring the biggest reduction. If we cleaned up buses, what can be achieved?’

The large number of Euro3 buses — many cascaded from London — means that air quality on the affected routes could improve dramatically by replacing them or repowering them with Euro6 engines. ‘We’re not talking about removing buses, but replacing them with newer technology. There would be a massive reduction in NOx if we replaced all of them with Euro6. That would be the best measure short of closing roads.’

He acknowledges that significant costs are involved and that the bus fleet cannot be replaced or upgraded overnight. The procurement process for new buses could take up to two years and retrofitting existing vehicles to Euro6 standards would cost £15,000 per bus. The Scottish government has still to clarify funding arrangements for such an upgrade, but is expected to offer a combination of capital grants and enhanced Bus Service Operator Grant (BSOG) payments for compliant vehicles.

Speaking at the same conference, Stephen Thomson, head of environment and sustainability at government agency Transport Scotland, acknowledged that with over 3,000 Euro3-engined buses still operating throughout Scotland, funding their replacement is a priority.