Alexander Dennis will take over production of the North American version of its Enviro200 midibus later this year following a mutual decision to end its five-year-old joint venture with market leading bus and coach manufacturer New Flyer.

The companies signed the joint venture agreement in 2012 to build the single-decker, badged as the New Flyer MiDi, at New Flyer’s plant in St Cloud, Minnesota. Since production began in 2014, they have sold 200 Buy America-compliant vehicles to 22 operators in the United States and Canada, built in two lengths of 30ft (9.1m) and 35ft (10.7m).

Production will transfer in the fourth quarter of this year to Alexander Dennis’s facility in Nappanee, Indiana where it already builds the tri-axle Enviro500 double-decker, with the UK-owned manufacturer also taken on responsibility for sales, marketing and aftermarket sales.

New Flyer says this will allow it to increase production of its heavy duty Xcelsior transit bus range at St Cloud. Alexander Dennis chief executive Colin Robertson says: ‘It has been a privilege to partner with such a respected player in the North American market and after this promising start, now is the right time for us to take full ownership of this product.’ 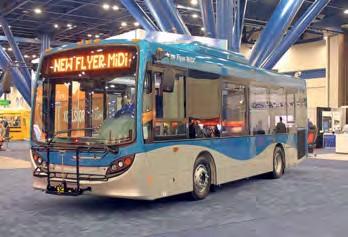