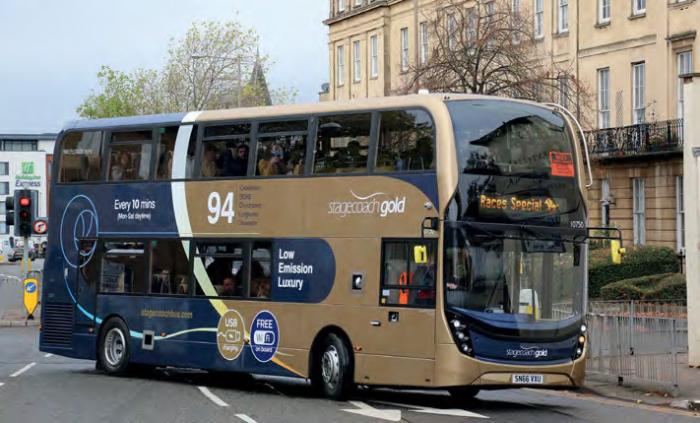 Stagecoach West placed 12 in service on 19 November from Cheltenham depot on route 94 (Gloucester-Cheltenham), while Stagecoach South followed on 5 December with 18 based at Aldershot for its route 1 (Aldershot-Camberley-Old Dean).

Stagecoach’s earlier double-deckers for Gold services have all been Scania N230UDs with the original Enviro400 body, but these are complete Alexander Dennis products powered by six-cylinder Cummins ISB Euro6 engines with stop/start technology. They have e-Leather high-backed seats, laminated floors, WiFi and USB charging points. They also have more legroom between the seats.

The Stagecoach West vehicles replace Scania double-deckers new when route 94 was upgraded to Gold specification in September 2009. The Stagecoach South vehicles increase the capacity of route 1, as they replace Alexander Dennis Enviro300 single-deckers new in 2011, which in turn replaced Enviro300-bodied MANs used to upgrade the service to what then was Goldline branding in February 2009.

Stagecoach West is cascading its seven-yearold double-deckers on to other routes, still in Gold livery, thus expanding its Gold network.

First use of its new double-deckers was over the weekend before the route 94 relaunch when they operated shuttle services for the Cheltenham November race meeting. 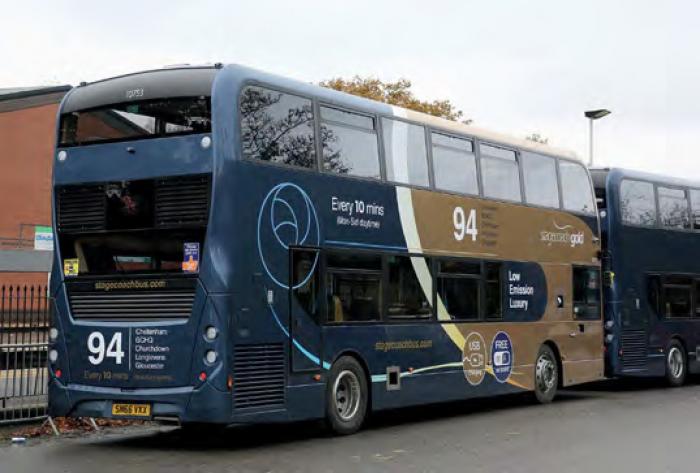 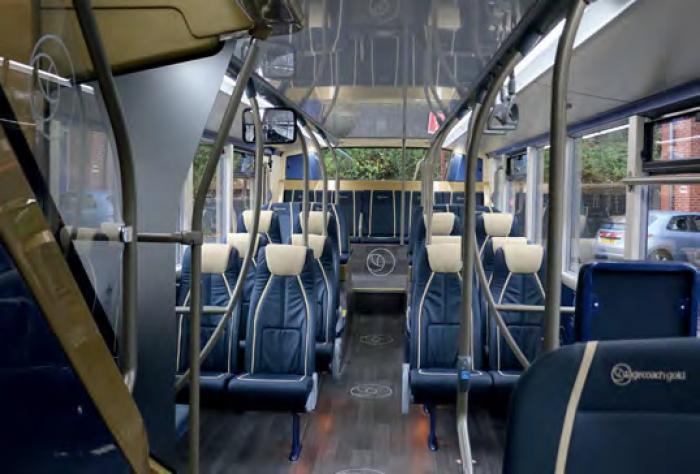 Stagecoach West managing director Rupert Cox says he has been left dumbfounded by Gloucestershire County Council’s decision not to proceed with a planned new bus lane in Cheltenham, which would have speeded up Gold service 94.

The priority measure, between Tennyson Road and Telstar Road, would have sliced 7min off the end-to-end journey time of the relaunched route. It was fully funded and approved, with work due to start in a few months’ time.

‘This is a short-sighted decision, which I have no doubt will have a damaging impact on congestion in Cheltenham over the longer term, as well as on local businesses,’ says Cox. ‘We need brave, positive action to help get our towns and cities moving again and for the council to backtrack on this scheme is a massive let down for bus passengers and other road users.

‘Bus priority is about far more than journey time savings. It is about modal shift and wider social, economic and environmental benefits.

‘We are investing heavily in new vehicles and new technology to deliver significant improvements for our customers. It is such a shame that our commitment to improving bus services is not being matched by others. Gloucester County Council has the power to reduce congestion. We would urge it to reconsider this decision for the good of the millions of bus customers who will be adversely affected.’

Mendip Mule Motorbus will run the pair in high summer season on its Jurassic Mule tour route 124 (Beer-Seaton-Lyme Regis- Charmouth) in Devon and Dorset in what it says are operating agreements with their respective new owners, who bought them for private preservation.