The council blames reduced central government funding, saying with less money big savings are necessary to balance its budget, with a different approach required for public and school transport. Most of the initial £500,000 cut in April last year hit rural market day services; the main combined £1.85million cuts were deferred to this year.

The council says 70% of Dorset’s 100 routes will continue, accounting for more than 90% of journeys serving 80% of the population…

The council says it is ‘moving away from the old way of subsidising bus companies to run commercially unviable services that very few people use’ to helping rural communities expand community transport.

Bus Users UK says the cuts will be ‘hugely damaging’ to communities and highlights a legal requirement in the Transport Act 1985 for all councils to provide socially necessary services.

Its England director, Dawn Badminton- Capps, says: ‘We made it clear to Dorset County Council during last year’s consultation that cutting essential bus services in order to save money is a false economy.’ Isolating people, she adds, will create a greater burden on social and healthcare budgets. ‘Cutting vital bus services will create more problems than it solves.’ 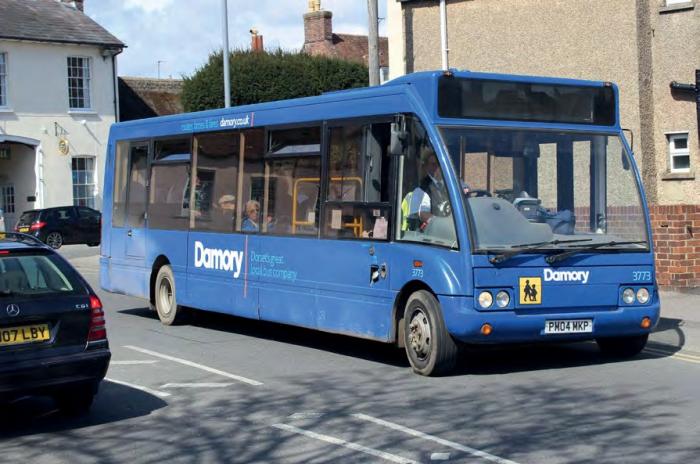 Virtually all of Damory’s routes are subsidised, although it has gained the Blandford-Salisbury contract from the council’s own fleet, but loses Blandford- Dorchester journeys serving Bere Regis and Weymouth to First Hampshire & Dorset.

In addition to its solitary new award, Damory will operate two Dorchester town routes and a limited service X12 (Blandford- Dorchester-Weymouth) commercially. These are all weekdays only between school runs with all other routes withdrawn.

In Dorset’s major re-procurement exercise of 2011, Damory won the majority of the sixyear contracts with 93% of public routes and 88% of school contracts. It trebled its fleet and expanded across the county at the expense of First and independents, but encountered some initial operational difficulties.

To replace Damory route 101 (Crossways- Dorchester), First’s new route 5, which has duplicated it since May, is extended from Weymouth, while the council confirms that it will replace the deregistered partly commercial Damory route 40 (Bridport-Yeovil).