A sanitising system, created by V-Stop and Future Developments Manufacturing, can fully disinfect a single-decker bus in seconds without any human interaction. 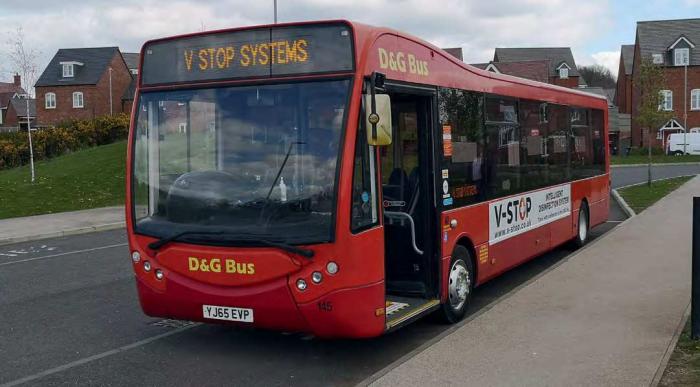 After over a year of politicians and scientists warning the public to avoid using public transport, statements now need to shift to reassure the public about bus travel. With the release of the Bus Back Better strategy, discussion should soon return to encouraging patronage growth, if the strategy is to meet its objectives. What remains to be seen is how easily public confidence will be restored, after efforts to control the pandemic have led to a downturn in passenger numbers.

One initiative which aims to change this is a Covid-19 safe bus fogging system, developed by V-Stop UK. The system, called V-Stop Bus, was displayed for the first time on April 16. It has initially been installed onboard a 45-seater Optare Metrocity, YJ65 EVP, operated by D&G Bus of Stoke-on-Trent. This particular vehicle is used on the operator’s number 9 service from Biddulph to Westbury Park, Newcastle-under-Lyme. D&G Bus said it has been trialling the system for the last six months.