First South West has completed the rollout of 30 new Alexander Dennis Enviro400 MMC double-deckers in Cornwall, while its Yeovil operations will stretch farther into Dorset from 27 February.

At a cost of £7.4million – fully funded by First – the new buses, featuring WiFi and USB charging points, improve the age profile of its Kernow-branded network. Unlike the factory-registered buses for First’s other fleets, all carry local registration plates.

The latest 20 with new The Tinner branding – reflecting Cornwall’s mining heritage – were phased into service by late-January in two-tone red for daily services 14/18 (Truro- Redruth-Camborne-Hayle-St Ives/Penzance). They upgrade the key corridor to double-deck operation and additionally feature tables with facing seats.

From 12 February the 18 is renumbered T1 and the 14 becomes T2, both half-hourly with a joint Truro-Hayle 15min frequency. However, weekday short workings, which had increased Truro-Camborne to every 10min, are withdrawn.

This summer it plans to extend its tourist livery on to Penzance, St Ives and Newquay-area scenic routes 1, 17, 56, 57 and 300 using a mix of 15 single- and doubledeckers including nine new part open-top conversions.

As a prelude to full integration with its The Buses of Somerset network and ticketing, expected in April, it is reducing the peak vehicle requirement from 27 February to make the fully commercial network more viable.

The town network is reduced in frequency, with route 1 renumbered 51 and the main sections of routes 2 and 3 combined into new route 53. South West Coaches withdrew its competing town routes 10/12 last June.

First’s 57/58/A (Yeovil-Sherborne- Wincanton) is recast, with the Wincanton extension halved to two-hourly and alternate journeys instead serving Marnhull in Dorset as a new 59, duplicating part of the supported X10 operated by Go South Coast’s Damory business.

The changes coordinate First’s Yeovil- Sherborne services to provide an even 30min headway in both directions. 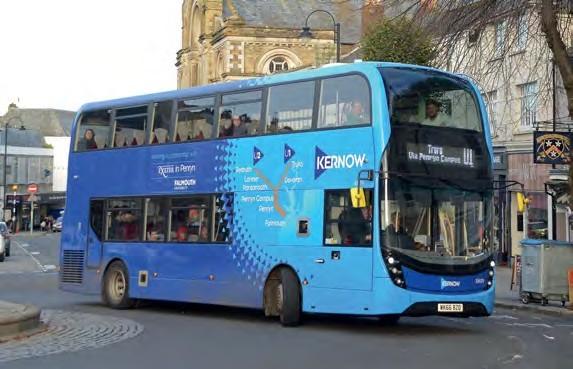