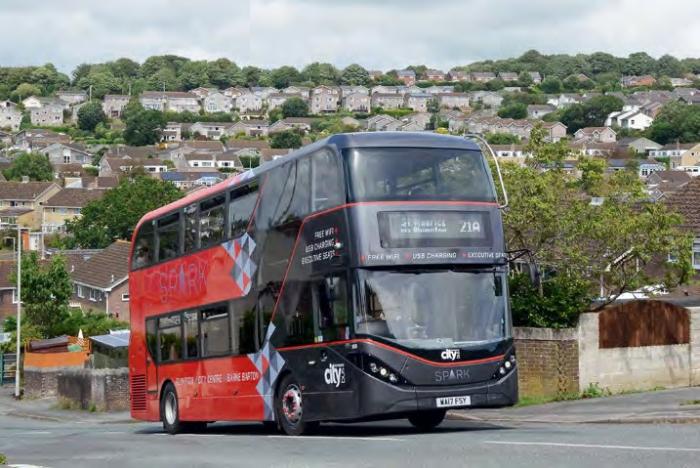 Plymouth Citybus introduced the Go- Ahead Group’s first 16 Alexander Dennis Enviro400 City double-deckers on its busiest cross-city service from 30 July, rebranding the route as Spark and cascading various shades of its Flash brands on to other parts of the network. 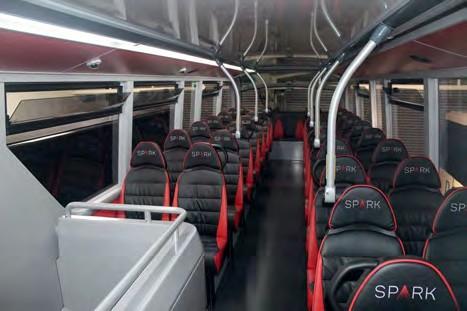 Leather seats with Spark branded headrests on the top deck of similar bus 554.

It has invested £3.5million in the two-tone metallic grey and red double-deckers — its first with Euro6 engines — which have glass stairwells, leather seats with headrests, free WiFi and, for the first time in its fleet, USB charging points throughout.

They displace four-year-old Red Flashbranded Enviro400s from route 21/A (Plympton-Barne Barton), which runs up to every 10min. Plymouth Citybus managing director Richard Stevens says their passenger capacity of 106 (74 seated and 32 standing) is higher than that of the previous vehicles.

Citybus has spent nearly £15million on new buses over the past five years, replacing half of its near 200-strong fleet and halving the average age to 7.5 years. It also has 13 five-year-old MAN EcoCity gas buses transferred this year from Anglian Bus, the first alternative fuel buses in Devon.

For the first time, this takes Blue Flash branding, introduced to compete with First’s Plymouth-Tavistock route taken over by Stagecoach, deep into Cornwall. The 11/A grew out of Western Greyhound routes.