Cardiff Bus cuts services as it seeks a return to profit 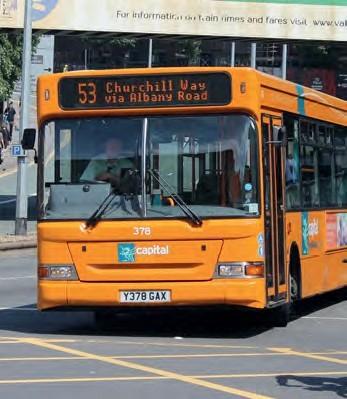 Cardiff Bus 378 (Y378 GAX), a Dennis/ Plaxton Super Pointer Dart, on one of the Capital Links routes to be withdrawn.

Cardiff Bus plans to reduce its network at the end of March, and has warned employees that the company could go bust without sweeping changes to the way it functions.

The council-owned company made a loss of £1.9million in 2017/18. The deficit in its pension scheme has been increasing while its cash reserves decline. It acknowledges that its cost base is ‘very high’ compared with other operators, with 69% being ‘employee costs’, and that current losses are unsustainable.

In 2016, Cardiff Bus appeared to embark on a lower-cost future when it transferred some of its older vehicles to a subsidiary company that employed drivers on different pay and conditions.

However, the experiment appears to be ending, with six Capital Links routes scheduled for withdrawal at the end of March.

Four night services are also due to cease. They include those started in 2017 on route 18, from the east to the city centre, and 27, from the north. Last summer, the company told Buses that Capital Links and the night buses were performing as expected.

In total, 12 routes are due to be withdrawn, some of them historic including Keyston Road, Channel View and Fairway Crescent.

Others will be amended to cover some of the resulting gaps. Some will be truncated, with the Scania OmniCity bendybuses of the Baycar service between the city centre and Cardiff Bay omitting the tortuous extension south of the Wales Millennium Centre.

Ending the exact fare policy appears not to be among the proposed reforms for Cardiff Bus. An end to higher rates of Saturday pay is proposed, as is a different calculation of holiday pay and streamlining the management structure.

The company’s unusually long paid meal breaks will also be discussed with unions, and managers are investigating sickness rates, said to be some of the highest in the industry.

Explaining the background, the company says Cardiff Bus was set up when society had different requirements and priorities, and now needs to adapt to customers’ new transport demands. It also says that it has been unable to raise fares because of the competition it faces.

However, it increased some in early February, with the £1 short hop becoming £1.20, less convenient for passengers paying exact fares.

Other operators whose drivers give change offer competition on some corridors. It also faces competition from cars and local rail services, which will be improved over the next five years through electrification, provision of new and longer trains and construction of two new stations in the inner suburbs. Cycling or walking instead of using the bus will become more attractive as a planned network of active travel routes, including cycle superhighways, takes shape.

A council spokesman says the authority has no plans to sell Cardiff Bus. Some in the industry believe the pension deficit and outmoded working conditions could make the company difficult or impossible to sell.

The Welsh government is proposing legislation to allow councils to set up new municipal bus companies or to create bus franchises (January Buses). Franchising in Cardiff would put Cardiff Bus at risk of losing some or all of its territory to lower-cost rivals, without curing the pension deficit.