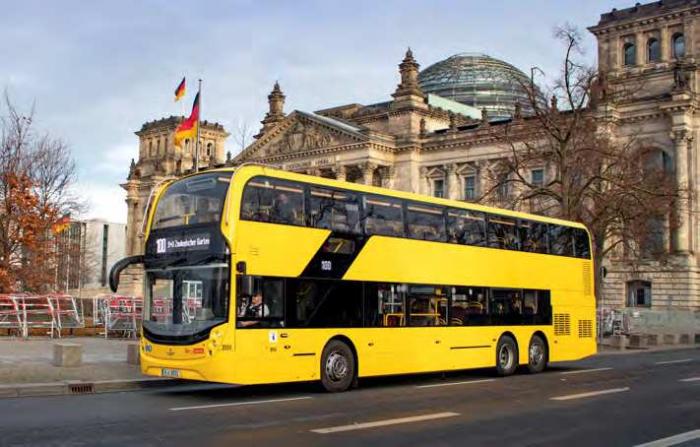 Delivery of the order is due to start in 2022 and be completed by the start of the following year. The buses will be built at Alexander Dennis plants in Britain, with the Scarborough site to lead final assembly.

Berlin’s bright yellow Enviro500s are 13.8m long, 4.06m tall and powered by a Mercedes- Benz OM936 diesel engine. With three doors and two staircases, they can carry up to 112 passengers, 80 of them seated.

Options for a further 230 Enviro500 double-deckers remain in the contract with BVG as part of a multi-year framework contract signed in 2018. These are likely to have electric drive, since the municipal has pledged to decarbonise the entire fleet by 2030. BVG has said it would only buy electric double-deckers if they can meet a 350km range target.

Once delivered, the Enviro500s will be supported locally by a team operating out of Alexander Dennis’ recently opened Berlin office, service workshop and parts warehouse. Alexander Dennis said it will increase its investment in Berlin to underpin the fleet roll-out and support its European expansion. Recruitment is underway for additional team members.